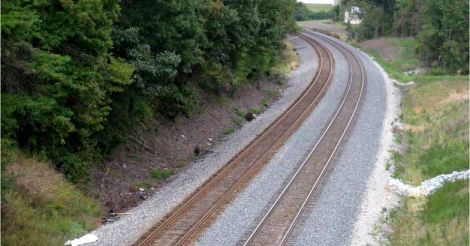 The long rails recline into a distance Where tomorrow will come before I know it. (Madras Central) | Representative image

The long rails recline into a distance

Where tomorrow will come before I know it. (Madras Central)

One of the tragic and most unexpected losses in the year 2017 for New Indian Poetry in English was the sad, untimely demise of Vijay Nambisan. He was only fifty-four years old.

Vijay Nambisan was perhaps the only one of a kind. Unlike most others, he had that great quality of being true to himself. He was our ascetic poet, our great recluse. He never wished to hog the limelight. I don’t think he has ever attempted to pen down a ‘better than thou’ blurb for himself ( like we all do) in any of his own poetry collections. In fact, his ‘First Infirmities’ came out only after decades of unexplained silence.

I first came to know of Vijay when he bagged the All India Poetry Competition, in 1988 for his poem ‘ Madras Central.' The poem, strongly bringing to mind ‘Adlestrop’ by the English poet Edward Thomas, has the closing lines, Terrifying/To think we have such power to alter our states,/Order comings and goings:/ know where we’re not wanted /And carry our unwantedness somewhere else/. Lines that hit you so hard, that the sting stays with you for the rest of your life.

It appears that Vijay had been ailing for sometime.

The only time I met Vijay was during a poetry reading in a Mumbai college. After the readings, Vijay, CP Surendran, Hoshang Merchant and myself walked down a hill together to the nearest suburban station in Borivali. In the crowded suburban train, Vijay, Surendran, and me, we stood together in an almost circle during the entire stretch. Vijay was pleasant, no beard yet, and he always seemed to have a smile. I gathered that he was working with an NGO, helping tribes in the North East. He was unassuming, the kind who could make his own undertaker cry. I often used to reflect to myself, why at all a poet of his substance chose to be so self-effacing.

The only later occasions when the two of us came together, symbolically rather, were just two. The first was when I reviewed Vijay’s Bhakti translations ‘Two Measures of Bhakti- Poontanam and Melpattur’ - for The Hindu literary column. I remember, how I came down rather heavily upon him, using his own admission in the introduction as my defense, that he barely could comprehend Malayalam newspapers, was not a bhakta, and had even asked his father to give him literal translations which he could put down in verse. But secretly I could not but admire his audacity to tell the plain truth. Now that needs real guts.

The second time was when Prof. Sachidananda Mohanty reviewed our poetry collections Vijay’s ‘First Infirmities,' and my ‘Tell me Neruda’ together in the Hindu Literary column under the banner, ‘Meditations on Life’ with the opening lines… ‘Here are two notable collections by two acclaimed Indian-English poets — Vijay Nambisan and Gopikrishnan Kottoor who are careful craftsmen of the poetic form; they attempt new poetic experiments, marked by different degrees of success and savoir-faire.

Well, what a way to be together, with a poet, who lived and died, a true poet.

(Gopikrishnan Kottoor is a winner of the All India Poetry Competition. He has also won several other prestigious prizes for his poetry. He has just brought out his 14th collection of poems, ‘Reflections in Silhouette’. email: gopikottoor@gmail.com)