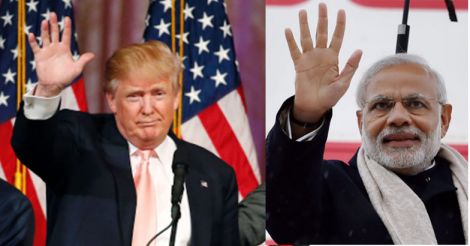 As prime minister Narendra Modi prepares for his first encounter with president Donald Trump in Washington, the Indian Americans must be gearing themselves to accord a warm welcome to the PM and also lobby for maintaining India-US relations at the present level, if not at a still higher level.

By the same author: Indian Foreign Service to get back its lost sheen

Divya-Sabari alliance: history made in heaven

Pandit Nehru had declared soon after independence that the overseas Indians, who had obtained foreign citizenship should owe their allegiance to their adopted lands. India, on its part, would remain alive to their welfare and interests. This policy had virtually alienated the Indian community from our diplomatic missions. They were all men on a mission, twice a year to salute the flag on the Republic and Independence Day anniversaries. They played no role in promoting Indian interests in the US, except promotion of culture through various community organizations.

Read: Ahead of Modi's visit, US 'approves' sale of 22 Guardian drones to India

During the visits of prime ministers, the elite was invited to meet them by the embassy. The support of the community to India was not automatic. The community virtually revolted during the Emergency and the embassy had to do firefighting on different fronts.

Rajiv Gandhi was the first PM of India, who changed India’s diaspora policy. He exhorted overseas Indians, particularly those in the US and the UK, to help India’s development by providing investment, technology and brain power. A number of people responded and returned to India. Indian investment also increased. In return, he pledged that India would assist overseas Indians if they faced any problems abroad.

The new policy came into play when a military coup took place in Fiji to unseat an Indian majority government. Unlike in the cases of Burma, the Caribbean and Uganda, from where thousands of Indians had to leave, India took strong action against the military government in Fiji through sanctions and getting Fiji expelled from the Commonwealth. Support was given to the resistance movement till democracy was restored in Fiji.

Indian diaspora began supporting Indian government as a result of the new policy. Several political forums came up in the US on the Jewish model and the Indian Embassy began to cultivate these forums and encouraged them to brief their Congressional friends and others on Indian policy. An India Caucus came into being in the US Congress, securing automatic support for Indian interests in the Congress and the Senate. The activities of the dissident groups from Punjab and Kashmir were also countered by the political forums.

The Indian community in the US was also politicized subsequently. The Overseas Indian Congress and the Overseas Friends of the BJP became active to support the Congress and BJP governments. It was during PM Vajpayee’s days that the community took on the responsibility of organizing mammoth meetings of the diaspora. The entire Indian community rose in support of the government of India when the nuclear tests provoked the US government to impose sanctions. Indians lobbied the Congressmen and others to change the US position on India’s nuclear capability. They were instrumental in lifting of sanctions through Congressional action, even as the dialogue between India and the US continued for two years. The community action was very much in evidence during the visit of president Bill Clinton to India and prime minister Vajpayee to Washington. The lobbying continued even after the change in government in India till the signing of the nuclear deal, which gave India a new status in the global nuclear regime. The community leaders not only pushed the Americans, but also applied pressure on the Indian government to make concessions.

The advent of the Modi Government marked a new awakening of the Indian diaspora in the US as PM Modi made it a priority to galvanize the Indian Americans to demonstrate his influence within the US. The mammoth gathering of Indians in the Madison Square Garden to greet PM Modi impressed president Barack Obama so much that he decided to get close to the new prime minister of India. The relationship continued till 2016 and elevated the US-India relations to the highest level in history.

The Indian community was very active during the US presidential elections, though the majority of the Indians were supportive of Hillary Clinton. But a surprisingly large number of Indians supported Donald Trump. Several Hindu leaders like Shalabh Kumar raised funds for Trump and he responded by declaring his affection for India. Hopes were raised about Trump adopting policies friendly to India because of his allergy towards China and Pakistan.

On the eve of PM Modi’s visit to the US, the situation does not look promising. The expectation that Trump, with his determination to combat Islamic terrorism, deep suspicion of China and keen business sense, would be a natural ally of India seems to have been belied. The unpredictability of Trump has become legendary in the few months that he has been in power. Though he had declared that he would fight Islamic terrorism, his first official visit abroad as president was to Saudi Arabia and an outcome of his visit was action against Qatar, not against other countries, which have adopted terrorism as a state policy. For Trump, ISIS is the only terrorist organization, not the terrorist outfits like Lashkar, which have been exporting terrorism to India. Pakistan has been left scot-free. The restrictions imposed on H1 B visas and hate crimes have affected the Indian community itself.

The question today is whether the Indian community can play a role in reinstating the architecture of India-US relations, built assiduously by PM Modi and president Obama. In the present circumstances, any huge demonstration by Indian Americans may be a provocation. For this reason, the community reception is being planned at a low key. There is some anxiety about the future of the Indian community, and PM Modi will raise this issue with president Trump as a solution is necessary for improvement of relations. The diaspora leaders must be working behind the scenes to influence the Trump administration. A new understanding between India and the US is crucial at this time in history when the world order itself is undergoing major changes. This is the time for the Indian diaspora in the US to work unitedly to bring India and the US together.