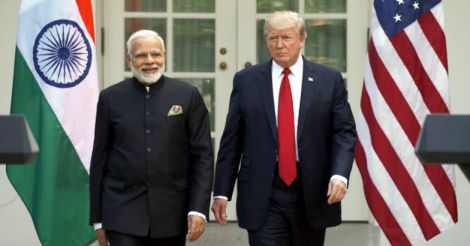 Prime minister Narendra Modi's visit to the US exceeded all expectations in terms of its gains in various fields, but many were disappointed that the one issue, which had agitated the minds of many Indians in India and the US, was neglected. This is the concern that in president Trump's America, there will be fewer Indian IT professionals than before, because Trump has already issued an executive order to reform the H1-B visa system with a view to restricting the arrival of foreign workers and to increase job opportunities for Americans.

The Indian IT companies in the US, the employees themselves, the Indian community in the US, the aspiring young people in India who share an American dream and their parents have nightmares about the outcome of the reform. Modi himself had spoken publicly about the need to preserve the work visa system for Indians in the US in the interest of good India-US business relations. In these circumstances, the deafening silence on this issue in the statements in the White House Rose Garden and the joint statement have surprised everyone.

It is unthinkable that the issue was not taken up at the summit level. As the preparatory sessions extended over a period of time, the issue must have come up in detail. Various formulations for a solution must have been discussed. In all probability, the US side persuaded India not to take it up to the highest level for the following reasons.

1. The whole migration issue, particularly the issue of work permits, of which H1-B is a part, is not a new issue between India and the US. The popular demand to change the rules has been there even during the time of Bill Clinton and Barack Obama, but care was taken not to hurt business interests between India and the US for a long time.

2. For Trump, migration control is fundamental to his policy and for him to ignore the demand for a reform of the work visa system is unthinkable. Nor will he be able to make an exception in the case of India.

3. Though an executive order has been issued, no decision has been taken and the US is aware of the implications of any change to the IT industry not only in India, but also in the US.

The US side may have also explained that it may be more prudent to state certain principles at the highest level and leave the matter to the Trump Administration to take appropriate decisions. For this reason, perhaps, the following two paragraphs were included in the joint statement:

"Recognizing that we are in an increasingly digital world, the leaders agreed to intensify the mutually beneficial partnership to fully harness their innovation capabilities to solve global developmental challenges. As global partners, the US and India resolved to further strengthen their collaboration in health, space, oceans and other areas of science and technology. The leaders also agreed to strengthen their cooperation to address the growing threats and challenges from malicious cyber activity and committed to work together to promote an open, inter-operable, secure, and reliable cyberspace environment that supports innovation, economic growth and commerce.

"Applauding the entrepreneurship and innovation of Indians and Indian Americans that have directly benefited both nations, President welcomed … (a slew of measures) to facilitate closer business and education lies between the citizens of India and the US."

The foreign secretary drew the attention of the press in Washington to these paragraphs when he was asked as to why H1-B visa issue did not figure at the summit. He rightly pointed out that with the kind of reiteration of the relevance of Indian technology to meet the new challenges of cyber security and the role of Indians and the Indian Americans in the development of the US, it is highly unlikely that any decision prejudicial to the common interests of the two countries would ever be taken. In other words, the work visa issue was discussed and an understanding was reached.

In India, of course, political parties found the lack of an explicit solution of the visa issue as a reason to characterize the entire visit as a damp squib. IT shares have dipped and there is anxiety among potential job seekers. The prophets of doom have already written the obituary of the IT collaboration between India and the US. Such conclusions are unwarranted.

It is worth recalling that the boom in the arrival of Indian professionals was occasioned by the Y2K threat, which loomed at the dawn of the 21st century. It was feared that the wrong reading of the dates, written from 2,000 would bring havoc of unimaginable proportions. It was the Indian IT professionals, who either prevented planes from dropping from the skies on account of Y2K or proved that there was no need for panic. A similar situation exists today on account of the cybersecurity threat, to which the president and prime minister alluded in their joint statement. It is not likely that at this critical time, the US would decide to prevent Indian professionals from entering the US.

We are aware of the thinking of the Trump administration on the lines of reform. One way is to fix the minimum salary of H1-B visa holders at a higher level from the present 60, 000 $ to at least 80,000 $. The US labor secretary told the Senate after the visit of Modi that raising the salary was justified on account of inflation alone. A senator pointed out that Indian IT professionals are being terminated in some places, but they were being replaced by other Indians! This is inevitable because there are no Americans to replace all the Indians at this time.

Ideally, an explicit assurance should have come from the summit on the H1-B visa issue, together with other gestures of cooperation, but the silence over this issue is not without a glimmer of hope.