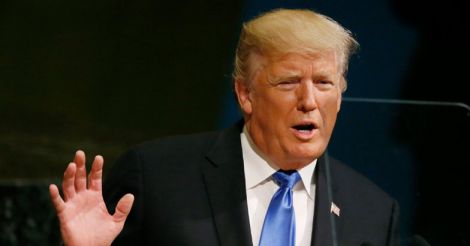 The UN had reached its lowest level of etiquette during the Cold War when the then Soviet leader, Nikita Khrushchev, banged his shoe on the UN table. According to a report at the time, Khrushchev "pulled off his right shoe, stood up and brandished the shoe at the Philippine delegate on the other side of the hall. He then banged his shoe on the desk." President Donald Trump’s speech this year at the UN General Assembly marked a new tone and tenor in UN speeches to suit the “new norm,” characterized by extreme nationalism and the push for global domination.

The only predictable feature of president Donald Trump is his unpredictability and he demonstrated it once again in the two speeches he made at the UN General Assembly this year. The first speech he made on UN reform was reasonable, with a mix of criticism and optimism about the UN and expression of faith in the UN secretary General Antonio Guterres although he mispronounced his name. But the second speech in the general debate sounded like the policy statement of a bull just about to enter a China shop. His speech was littered with words like sovereignty, peace, progress, etc., but the overall thrust was antithetical to those concepts. This must be the first time that a head of state declares from the podium of the UN his intention to wipe out another state from the face of the earth.

The speech the president made at a special meeting to discuss UN reform appeared like a state department draft, within the parameters of the US policy, but laced with Trump’s displeasure and disappointment with the UN. He decried its “mismanagement” and “bureaucracy,” but was full of praise for the global body’s mission. In a way, he was preparing for his blast next day by being eminently reasonable towards the UN itself. Those who came to expect fireworks were relieved that Trump stuck to reading his prepared remarks.

“In recent years, the United Nations has not reached its full potential because of bureaucracy and mismanagement while the United Nations on a regular budget has increased by 140 percent and its staff has more than doubled since 2000,” Trump said.

“I am confident that if we work together and champion truly bold reforms, the United Nations will emerge as a stronger, more effective, more just and greater force for peace and harmony in the world,” he added.

As expected, Trump expressed concern over the fact that the US was carrying the burden of funding the UN and threatened to cut off US funding, which currently covers approximately 22 percent of the overall UN budget and 28 percent of the peacekeeping budget. But he surprised his audience when he said that the UN was founded on “truly noble goals,” a far cry from his attack on the UN during the campaign and later. Trump also called for setting specific “metrics” for “success” for UN Peacekeeping forces but did not elaborate what that means in terms of ever-changing violent conflicts around the world.

Trump praised his own business acumen for realizing the potential of the UN to provide business to New York by building a Trump Tower across the street on First Avenue. But, as a businessman, he felt that the world has not seen the results of the investment made in the UN by doubling the UN staffing in the last two decades. He said, however, that he would not have minded the investment if the UN had done a good job. The Republicans had long criticized wastage of money by the UN and had withheld payments to make the UN spend less. The tactic was compared to Cinderella’s stepmother reforming the girl by starving her.

The second speech, much more formal and heard across the globe, was a real shocker. After claiming how much the US had accomplished since he became its president, Trump lashed out at “rogue regimes represented in this body (the UN), which not only support terror but threaten other nations and their own people with the most destructive weapons known to humanity.”

After describing the misdeeds of North Korea, including the building of nuclear weapons and missiles, he said that “we will have no choice but to totally destroy North Korea. Rocket Man is on a suicide mission for himself and for his regime.” But he said that the UN had the potential to de-nuclearise North Korea by concerted action.

The next to be denounced was Iran, which “masks a corrupt dictatorship behind the false guise of a democracy.” He reiterated his resolve to withdraw from the Iran Nuclear Deal. “The Iran deal was one of the worst and most one-sided transactions the United States has ever entered into. Frankly, that deal is an embarrassment to the United States, and I don't think you've heard the last of it,” he said.

Trump restated, in less aggressive language, his strategy on Afghanistan, Syria, and Iraq, but lashed out against Cuba and announced that sanctions would not be lifted until it makes fundamental reforms. He used harsh words against the Maduro regime in Venezuela and promised action to reverse its path to dictatorship. His message to the world was: “We will fight together, sacrifice together, and stand together for peace, for freedom, for justice, for family, for humanity, and for the almighty God who made us all.”

The reaction to the US president’s unprecedented tirade of threats and intimidation was universally negative, particularly from the nations chosen by him as dangers to the globe. North Korea, Iran, and Venezuela paid back in the same coin. Many others maintained a stoic silence. But the greatest praise came from Benjamin Netanyahu, who characterized the speech as the boldest and most courageous one he had heard from a US President in 30 years.

It should be noted that Trump’s speech was not devoid of hope and optimism. He did not dismiss the UN as an anachronism or a club for people to have fun. On the contrary, he stressed that the UN could play a crucial role in reversing the negative trend in world affairs. Moreover, there was no immediate threat of follow up action on any of the issues he raised, including the Iran deal. North Korea implied this when it said that the speech was just “dog barking”. The hope still is that, like in other cases, Trump will be more restrained in action rather than in words.

The India-Pakistan exchange this year reached a higher level of bitterness than ever before. India rebutted Pakistan prime minister’s harsh attack on India by referring to Pakistan as “Terrorisation” and by criticizing Pakistan’s internal policies. It was a no holds barred exchange in which India contrasted its development against Pakistan’s creation of terrorist outfits. Though this was reflective of the desperate situation in the relations, many wondered whether India and Pakistan were also heading towards a verbal war. But as before, the other members watched with detachment and amusement when the countries engaged in mutual accusations. The fact that these exchanges do not serve any purpose is not realized as the two delegations become more and more innovative in rhetoric and retribution.