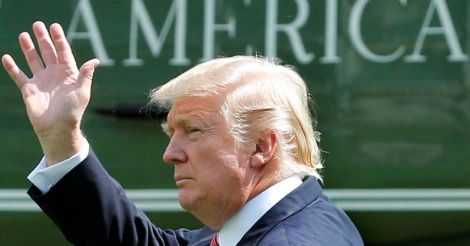 This is a big concession by US president Donald Trump, who is generally ruthless about migrants.

An issue that external affairs minister Sushma Swaraj raised with the secretary of state Rex Tillerson was the fate of some 7,000 Indian 'dreamers' who face an uncertain future in the United States. She must have pointed out that the impending expulsion of these young people, who have known no other land, was even more serious than the threat to change the rules regarding the H1 visa system.

The circumstances under which a large number of children, mainly from the neighboring Latin American countries came to the US are not clear, but the problem is acute because most of them are professionals with no roots except in the United States. Moreover, they are extremely crucial to the US itself because of their qualifications and their role in the US economy.

The 'Dream' Act (the acronym for Development, Relief, and Education for Alien Minors Act) is an American legislative proposal for a multi-phase process for qualifying alien minors in the United States that would be first granted conditional residency and, upon meeting further qualifications, permanent residency.

The bill was first introduced in the senate on August 1, 2001, by the United States senators Dick Durbin (D- Illinois) and Orrin Hatch (R- Utah), and has since been reintroduced several times, but has failed to pass.

The name of the Act, ‘Dream’ gave these youngsters the nickname 'dreamers.' Many of them were also registered for applying for citizenship. But the legislative process had gone on for many years and considering the fact that many of them had reached about 30 years of age, the Obama administration invented DACA (Deferred Action for Childhood Arrivals) to simply defer action against them for two years, within which the legislation was to fructify. They were also asked to register themselves to realize their dream of becoming citizens.

When rich neighborhoods reek of hypocrisy

Diplomatic homes away from home

What Trump did was to suspend DACA and set a date, March 2018, for the legislative process to complete. In the event the Congress failed to reach an agreement by then, the dream will turn into the nightmare of expulsion. Trump argued that this was only a measure to deal with a large chunk out of the eleven million illegal aliens in the US. The uproar over the suspension of DACA was so huge that Trump had to declare that he was not inimical to the 'dreamers’ and that the idea was to remove the Damocles’ sword hanging over their heads by encouraging legislation. The house speaker, Paul Ryan, who’s not a great supporter of the president, expressed optimism about the legislation being finalized within the stipulated period. Trump’s unusual promise to work with the Democrats on this issue drew applause from veteran democratic Congresswoman, Nancy Pelosi. Much depends on the ability of the Congress to legislate in six months, what it had failed to do since 2001.

A group of Republican senators has now unveiled a long-awaited legislation to assess the recipients of the DACA program, even as Democrats are preparing an attempt to force a vote on the ‘Dream’ Act. Senators Thom Tillis of North Carolina, James Lankford of Oklahoma, and the original ‘Dream’ Act co-author Orrin Hatch introduced the ‘Succeed’ Act, which includes a pathway to citizenship on the condition that ‘merit-based’ rules are followed.

The bill would require DACA recipients who arrived in the US under age 16 before June 15, 2012, to adhere to a number of eligibility requirements for conditional status, including:

3. Submitting biometric data to the department of homeland security,

4. And signing a waiver that would revoke certain benefits if they violate status terms.

While the bill does not have any additional border-security provisions like the White House has demanded, the sponsors said that it is not a ‘stand-alone’ legislation and would likely be paired with border security. Some Republican leaders are terribly disappointed that Trump may be wavering on booting out all the “dreamers” by signing DACA into law. “We have made as clear as you can possibly make it, we want less immigration,” they said. “Stop dumping the third-world on the country. They claimed that Trump was elected to the White House because of his stance on immigration and bemoaned Trump’s recent mixed signals on the DACA program.

Republicans were surprised earlier when the president abruptly announced that he would be ending Deferred Action for Childhood Arrivals, then promptly backtracked, calling on Congress to codify DACA into law. Lawmakers already faced a daunting legislative calendar, leaving little time or political capital for a bruising, drawn-out fight over ‘Dreamers’ —a sympathetic group that the vast majority of Americans, including the majority of Republicans, wish to support for remaining in the country.

The ‘Succeed’ Act’s path to citizenship is narrower than the one proposed by the initial ‘Dream’ Act, which had failed several times since being introduced in 2001. The Republican legislation would take a total of 15 years for qualifying applicants to apply for citizenship, requiring numerous security and background checks, as well as biometric data and fully paid back taxes. Furthermore, it would expand the categories of crimes that would make a potential recipient ineligible for a ‘conditional permanent residence status,’ after which they would be required to either get a college degree, join the military, or be consistently employed. The president himself is reportedly sympathetic to the ‘Succeed’ Act.

The Trump-approved DACA legislation would present several potential sticking points for Democrats. Crucially, the ‘Succeed’ Act would ensure that ‘Dreamers’ could not sponsor family members for entry into the US until they become citizens. Trump himself previously insisted on Twitter that this ‘chain migration’ cannot be allowed to be part of any legislation on immigration. The new solution is to wait until these DACA recipients obtain citizenship, a process that will take 15 years and create a dent in the system to prevent ‘chain migration.’ The bill could also be opposed by the far-right, which had an objection when Trump initially struck his deal with the Democrats to save DACA. But the ‘Succeed’ Act has one advantage where previous bills of its kind had failed in the sense that a Republican president is giving political cover to a Republican-backed bill.

The recent compromise move by the Republicans, approved by the president, has raised hopes that the 'dreamers' may eventually realize their dream of citizenship, but it is as yet uncertain as to whether the new legislation will pass before the deadline of 2018. But the demarche by external affairs minister Sushma Swaraj may prove helpful to the Indian ‘dreamers.’ If the new law is passed, some 8,00,000 children who came to the US without documents will be able to secure US citizenship over a period of time. This is a big concession by Trump, who is generally ruthless about migrants.