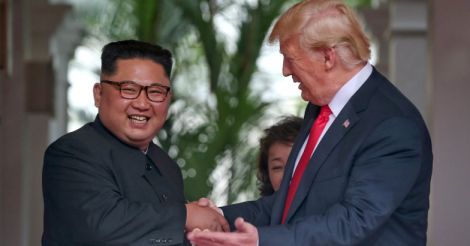 The summit between US president Donald Trump and his North Korean counterpart Kim Jong-un In Singapore has been characterised as historic, not because its outcome is game-changing, but because this is the first time that a serving US president has met a North Korean president. It has its value, but in a sense it is a case of history repeating itself. The expected outcome was either an agreement to continue the dialogue on peace in the Korean Peninsula at best or a return to the war of words at worst. The world has heaved a collective sigh of relief that the Sentosa summit ended with the former rather than the latter.

The excitement over the fact that these two men with the reputation for unpredictable and irrational behaviour were meeting face to face was justified. No serving US president had ever shaken the hands of a Korean dictator. The body language was warm and the two men appeared businesslike in their interaction. When the news came that the two had also signed an agreement, there was jubilation. The two of them became stars overnight and the democratic Singaporeans applauded a Korean dictator on their streets. Kim appeared to enjoy every moment of his triumph of having been accepted as an equal and denoted as a smart negotiator. Kim had his day on the international arena. Trump also seemed happy that he was guiding a young man to his senses.

But the reality is that neither of them gave any substantial concession to the other. Trump said that the summit had gone better than anybody could have expected and that the piece of paper he signed would be more effective than those signed by his predecessors not because there was anything new in the text, but because the US had a different administration and a different president.

This is not the first time that North Korea has agreed to make concessions in return for economic benefits and it is good to remember that it had reneged each time. The Agreed Framework in 1994 under Bill Clinton and six-party joint statement in 2005 under George Bush covered the same ground, but they were abandoned without any ceremony. A similar fate may befall the Sentosa Agreement also.

The Singapore document committed the two nations to establish new US-DPRK relations and agreed to build lasting peace on the Korean Peninsula. The Democratic People's Republic of Korea committed to work towards complete denuclearisation of the Korean Peninsula and agreed to repatriate the remains of US POWs. Trump, meanwhile, committed to provide security guarantees to the DPRK. Both parties have agreed to follow-up at the ministerial level. The US nominated its secretary of state, while the DPRK did not nominate a specific individual.

None of these is either new or clearer than before. The previous documents had similar commitments, which were not respected before and they are not likely to be respected in the future.

The security guarantees and denuclearisation are closely linked even in the latest text, but the DPRK had never agreed to unilateral denuclearisation. The only difference this time is that Kim came to Singapore after ritualistically demolishing some of his nuclear facilities. That has not in any way reduced his bargaining capacity as his nuclear Crown Jewels are safe and ready for use. Words like peace, security, prosperity and confidence-building have always been there in the agreements, both past and present.

It was at the impromptu press conference that Trump threw bombshells, one at the North and one at the South. He said that sanctions would remain in place and shocked Kim and he said that he was suspending joint military exercises with South Korea, giving a rude shock to president Moon Jae-in, who had worked hard to bring peace in Korea. Trump also hinted that he was keen to withdraw the American forces from South Korea and Japan for financial reasons. They both made no secret of their disappointment, but took the news in their stride, knowing Trump and the tentative nature of the whole package.

What is really new about the Sentosa Agreement is that it has been arrived at through negotiations between the two presidents and the two are likely to remain in place long enough to carry it to fruition. President Kim looks solidly in place at the helm of affairs in Korea and the rumours of the impeachment of Trump may come up only if the Democrats capture the Congress and the Senate. Russia inquiry seems rudderless, but these things have a way of resurrecting at the wrong moment.

The world at large, particularly those countries which have a stake in it like China and Russia seem confident that nothing that happened in Sentosa would affect any of them in a fundamental way. Nothing is verifiable or irreversible. India’s own reaction was subdued satisfaction with the proviso that North Korea’s nuclear nexus with Pakistan must also be covered when denuclearisation takes place.

In the new global disorder ushered in by Trump, he himself seems to have created a sense of order and hope. Those who called him “a bull in a China shop” are giving him credit for breaking China only selectively. As for Kim, his image of a brutal and ruthless dictator has changed into a charming and able negotiator. Singapore restaurants can now feature “Kim khimchi” and “Trump burgers” at phenomenal prices and offer South Korean beer to wash it all down.

A week after the Singapore summit, there is still no clarity as to what the eventual outcomes will be. If the negotiations will continue in peaceful conditions, that itself will be of benefit to mankind. But the real test lies in ensuring that history does not repeat itself after the historic summit.

From July 26 to 28, 2019, the first ever Fortnite World Cup took place in the Arthur Ashe Stadium in New York.