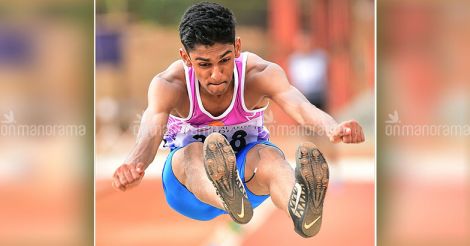 M Sreeshankar set a new meet record of 7.72m in the U-20 boys' long jump. File photo: Sameer A Hameed

Ideally, our juniors too should follow the international calendar in which the seasons are divided into two – winter and summer seasons. The winter season runs from January to April while the summer is from May to October.

For an athlete rest is very important as he/she wants his/her body to be in perfect condition to achieve better results. Sadly in India, the athletics calendar for students is prepared looking at the academic year and as a result the top juniors don't get sufficient time to rest and some times they even miss out on major championships.

Coming back to the Guntur meet, Haryana ended Kerala's reign to clinch the overall championships. Haryana athletes were more organized this time and pipped Kerala to the title. Haryana have traditionally dominated throw events, but this time around they excelled even in relays, which Kerala have monopolized over the years. Kerala have dominated athletics on the national stage and it has a lot to do with the fact that our schools take great care in promoting sports. At present, Mar Basil HSS, Kothamangalam, St George's HSS, Kothamangalam, Parli HSS, and Kalladi HSS are the top sports schools in the state.

I would like to add that our athletes were a tired lot at Guntur after having competed at the state meet at Pala, and the national school meet in Bhopal. A few athletes fell either sick or were missing in action at Guntur.

One thing which worries me is the issue of doping. One look at an athlete and you can make out his/her physical growth is not natural. Today's youngsters have access to Internet and they can easily fall into the trap of using performance enhancing substances. The coaches, school management and parents have to be vigilant in their efforts to put an end to dope menace and ensure there are no short cuts to success.

Long jumper M Sreeshankar, who set a new meet record of 7.72m in the U-20 boys' long jump, and Rubina Yadav, who smashed the national record in U-18 girls' high jump, were the standout performers at Guntur. Kerala's Sreeshankar, son of former international athletes Murali and Bijimol, is a natural and has got great ability. Haryana's Rubina, who came up with a fine jump of 1.81m, has got great physique and is a genuine prospect.

The performance at the junior nationals is taken into consideration for the central government's Khelo India project. The selection trials for Khelo India will be held in New Delhi in January and the 1,000 selected sportspersons will get Rs 5 lakh per annum to take care of their training as part of the project. The Center has also started a Jumps Academy in Bengaluru, Sprints Academy in New Delhi, and Throws Academy in Patiala to groom talented youngsters. These are exciting times for the youngsters as the government is spending big money on athletics. Today's athletes are lucky as they can train on synthetic tracks and get to use spikes. Throwback to our era and an uneven track was the one in which majority of us trained in our early days!

I am happy to see this change, for we need to spend money in order to achieve results on the international stage. The school coaches have to be prudent to understand they can take their disciples only to a certain level and after that more qualified coaches need to train them.