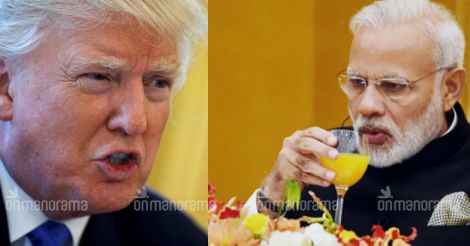 Since 1976, no first meeting of a new United States president with an Indian prime minister has been fraught with uncertainty and low expectation as the meeting between Donald Trump and Narendra Modi. But the atmosphere is not as tense as it was when Richard Nixon first met Indira Gandhi in New Delhi in August, 1969.

Nixon had come at a time when Indira Gandhi was facing a challenge in the elections of the Indian president from the syndicate in the Congress, and was unhappy with the US president’s open support to Pakistan in its proxy war against India.

The distrust level will not be that high or bitter when Modi is received in the White House by Trump on June 26. Unlike Indira, Modi is on a strong political wicket, and Trump has not made any move towards supporting Pakistan. Coincidentally, there is a presidential election going on in India when the prime minister meets the new American president.

Yet, there are noises and decisions of Trump, which have caused deep disquiet in the Indian government. As is his normal practice at high-level summit meetings, Modi is unlikely to take any minister with him. He would be accompanied by national security adviser Ajit Doval, foreign secretary S. Jaishankar, Indian ambassador to the United States Navtej Sarna and other officials. Modi's third visit to the United States in three years as prime minister will be the most low-key event compared to the first two.

He was accorded state guest status by Barack Obama, who took the Indian prime minister in his bullet and missile proof car (called the beast) to the Lincoln Memorial and charmed him. Modi had addressed huge rallies in New York. Similarly, for his second official visit to the world's most powerful country, Modi had carried on the bonhomie, and addressed a big rally of Indian migrants in San Francisco.

But now the meeting with Trump, who is as big a showman as Modi, is not accompanied by any high profile public events. Indian officials say they would like the prime minister to have at least two sessions with Trump to work on the relationship between the two countries, and also clear the misconceptions the POTUS has about India on climate change, taking away American jobs by flooding America with Indian cyber workers, and also on India's long-term relationship with Iran. Trump has not yet named the American ambassador to India, after asking former ambassador Richard Verma to resign on the day he took the oath of office.

But Indian officials say Trump has kept too many vacancies pending and not much should be read on non appointment of an ambassador to India. While the Indians will be thrilled with two meetings, the White House has indicated that there will be only be one substantial meeting. First, they’ll be meeting for a one-on-one session, and then have delegation level talks.

But the American delegation can be a big one, including vice president Mike Pence, secretary of state Richard Tillerson and the heads of finance and commerce departments. Defense secretary James Mattis has declared India would remain a major defence partner of the US, and he hopes to integrate the defense forces of the two countries in many ways.

Like Modi, Barack Obama had charmed Manmohan Singh by inviting the prime minister as his first state guest. Obama's predecessor George bush had a charming relationship with both Atal Behari Vajpayee and Manmohan Singh, as the civilian nuclear deal was clinched by Bush and Singh. Earlier, Bill Clinton had good meetings with Narasimha Rao, I.K. Gujral and Vajpayee as the Americans relaxed from the imposition of sanctions after India tested its nuclear bombs in 1998.

Similarly, Clinton's predecessor George H.W. Bush had a rapport with Rajiv Gandhi. Both Rajiv Gandhi and his mother Indira Gandhi had charmed Richard Nixon. Jimmy Carter, who ruled from 1977 to 1981, was an old friend of India who hit it off with both Morarji Desai and Indira Gandhi.

Modi knows that Trump, despite the rhetoric, is also a good businessman and is an expert in the art of making deals. Modi would bargain hard as India is a major destination for American defense and other exports, even though they both want goods to be made in their countries.

Modi's slogan is “Make in India,” while Trump exhorts “Make America Great Again" by bringing back the jobs from Mexico, China and India to the United States. Their personal chemistry tell whether or not they are made for each other.