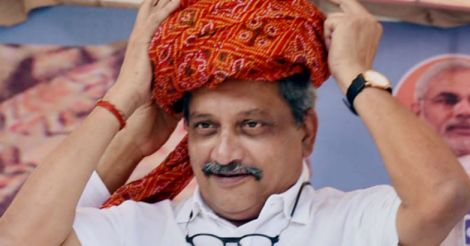 Manohar Parrikar during the Tiranga Yatra in Haryana. File photo

Manohar Parrikar missed Goa when he became defence minister in Delhi for more than two years. Now that he has gone back to his first love by being the chief minister of the tiny coastal state, Parrikar is missing his days controlling the vast defence ministry.

But Parrikar's statements on his stint as the defence minister from November 2014 to March 2017 have caused a bit of embarrassment for the Narendra Modi and co., who project themselves as a muscular government, compared to the Manmohan Singh regime.

Two of Parrikar’s statements made at a public meeting in Goa have not gone down well with party insiders it seems. Firstly, Parrikar had said he had inherited a defence ministry, which was in "shambles and chaos" when he took charge in November. Although he was referring to the UPA regime, critics of Parrikar and Arun Jaitley think otherwise. The have questioned whether he meant Jaitley handed over a "chaotic ministry" to him.

When Narendra Modi took over as prime minister on May 26, 2014, he had given additional charge of defence to Jaitley. For little less than six months, Jaitley had administered the ministry, in addition to finance, and claimed to have steeled up the ministry's resolve to face external challenges. Interestingly, when Parrikar made it clear he wanted to go home after Goa threw up a hung assembly early this year, Modi relieved him as defence minister and gave additional charge to Jaitley again.

The finance minister has been the most trusted senior minister in the prime minister's books, as he had also been given additional charge of information and broadcasting when Prakash Javadekar was relieved of the additional charge.

While Parrikar claims he had revolutionized the ministry, his track record was uneven as the decision on the implementation of One Rank One Pension Scheme was delayed and he had also failed to be decisive on the acquisition of the new generation warplanes for the Indian Air Force.

Even though the prime minister took away the file on acquisition of foreign fighter aircraft in 2015 from Parrikar and announced the purchase of 36 Rafale jets from France one fine day, the two countries have not signed the purchase agreement yet. Parrikar also could not push through his pet proposal to change the defence acquisition system by establishing a common agency, keeping out the three forces, as well as the defence research and development organization, from the procurement process.

The other statement of Parrikar, which caused red faces in the government and the BJP, was his claim that he had ordered the army to carry out surgical strikes against Pakistan for the beheading and mutilation of Indian soldiers.

Though the government has maintained that it was a decision taken by the army, Parrikar claims that an insulting query by a television anchor to his colleague Rajyavardhan Singh Rathore after the 2015 anti-insurgency operation along Myanmar border prompted him to plan last year’s surgical strikes in Pakistan occupied Kashmir (PoK).

Without the PM’s approval, Rathore had made a statement praising the army for sending its commando units into Myanmar to kill the Naga insurgents who killed 18 Indian soldiers. As Myanmar expressed its protest, the government maintained that the army had done the operation from within Indian borders. But an enthusiastic Rathore praised the army for crossing into Myanmar, and had to give an explanation to get away.

Now, Parrikar has once again confirmed that the army went into Myanmar. He also said he was angry when the anchor asked Rathore whether India had the guts to do the same operation with Pakistan. That angered Parrikar as defense minister so much that he told the army that it must cross the border into Pakistan so that nobody questions the guts of the government or the army.

After a few weeks, the army announced it had made surgical strikes by sending its teams into Pakistan territory, but did not reveal details of the enemy soldiers who were killed and the assets destroyed, for maintaining operational secrecy.

Parrikar, who won over small parties and independents to form the government in Panaji, is obviously missing his role as one of the four important ministers in Delhi, who are part of the cabinet committee of security. But the party does not want Parrikar to be too garrulous on his days as the defense minister, as all the credit for the tough policies are being attributed directly to the leadership of Narendra Modi.

Radhika Apte is the latest entrant to the league of Bollywood actresses who made a conscious effort to walk away from the...