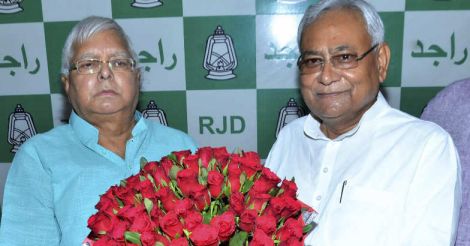 Bihar chief minister Nitish Kumar is certainly a canny politician who can weigh up situations well. But in the aftermath of the recent CBI raids on the properties of his sworn-enemy-turned-ally Lalu Prasad Yadav’s son and deputy chief minister Tejasvi Yadav of Rashtriya Janata Dal (RJD), Kumar is faced with a Hobson’s choice.

Although his proxies in Janata Dal (United) were quick to censure the tainted minister, Kumar has been maintaining a stoic silence ever since the raids were conducted, keeping even his friend-turned-foe BJP guessing.

If Yadav is allowed to continue as deputy CM, Kumar’s clean image will take a beating. And if not, the grand alliance (Mahaghathbandhan) with RJD and Congress might be blown away into oblivion.

The unease in the national opposition began to solidify when the JD(U), barring the Kerala unit, decided to back Ram Nath Kovind of the NDA, instead of Meira Kumar, the nominee of 18 opposition parties, including the Bihar CM's alliance partners RJD and Congress.

Interestingly, when Kumar was sharing power with the BJP in 2012, he had backed UPA nominee Pranab Mukherjee against NDA candidate P.A. Sangma. A year later, he questioned the choice of Narendra Modi as the prime ministerial candidate of the BJP and that eventually led to the break up of his profitable alliance with the saffron party.

Once he ditched the 'communal' BJP, Kumar joined hands with the RJD and the Congress to halt the Narendra Modi juggernaut in 2015 Bihar elections and effortlessly became the poster boy of secular politics.

In the 243-member Bihar assembly, RJD has 80 members, JD(U) has 71 and Congress, 27, giving a comfortable majority to the alliance. The BJP, which has offered support to Kumar if he were to dump the RJD and the Congress, has 57 members, including its NDA partners. But then, Kumar will be at the mercy of Modi, who is not at all a forgiving leader.

Nevertheless, Kumar can keep the Yadavs and the BJP out if he succeeds in splitting the RJD and the Congress. But if Prasad blinks first and asks his son to stay out of the government till he is cleared of corruption charges, it would be a political and moral victory for Kumar. The week ahead is critical for both Bihar and Kumar, as the CM has hinted that he would break his silence after the presidential elections on July 20.