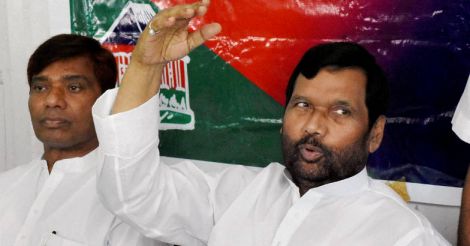 The nationwide protests by Dalit organisations on a range of grievances against central and state governments as well as the judiciary have made several leaders in the NDA find their tongue. One leader who has become articulate in the last six weeks is Ram Vilas Paswan, who has served in the governments of six prime ministers, including Narendra Modi. Once the record holder for the highest margin in Lok Sabha elections, Paswan has been a silent passenger in the Modi government for nearly four years, confining himself to the food and civil supplies portfolio. But Paswan, whose Lok Janshakti Party is a minor constituent of the NDA, is now eloquent as the Modi government and the BJP have gone on the defensive.

Though he has served six prime ministers, Paswan's ideal has been his first boss V P Singh, who headed a 11-month government of the National Front in 1989-90. As welfare minister, Paswan prepared the cabinet note for implementation of the Mandal Commission Report of 1979 on reservation for backward classes. Singh, facing a revolt from his deputy prime minister Devi Lal, implemented the report, leading to major protests. But Singh was hailed as a messiah of the backward classes and when he ordered the arrest of BJP leaders taking part in a yatra for Ram temple, he was hailed as a secular hero. Paswan has now said that when Singh became prime minister, he was seen as a leader from a feudal background, but within nine months, the Raja of Manda had become a champion of social justice.

Paswan now wants Modi to emulate Singh, who had been roundly condemned by BJP and RSS for re-injecting the poison of caste into Indian politics. Paswan, who has been emboldened by the disquiet among the Dalits and other backward groups, feels Modi faces a major perception problem. Paswan, known for his aggressive stand on Dalit issues, has been keeping quiet, especially after Modi in 2014 had advised Paswan's son Chirag, also a Lok Sabha member, should not interfere in governmental affairs. But now Paswan feels the ground is shifting from under the NDA and that the situation is not very favourable in his home state of Bihar, where BJP has re-entered its alliance with chief minister Nitish Kumar.

But the prescription given by Paswan to turn Modi into another V P Singh is rather drastic for Modi to adopt. Paswan wants the PM to announce reservation for Dalits in the private sector, a long-pending demand of Dalit organisations. but Modi's support base of BJP and RSS is not in favour of a constitutional amendment to ask private sector companies to fall in line. The RSS and BJP believe that enhanced recruitment of Dalits in private companies should be a voluntary step by the managements. The BJP believes any attempt to amend the Constitution without a national consensus can have adverse consequences. Same is the case with the demand for enforcing reservations in promotions in public sector, as the Supreme Court has ruled that promotions should be based on merit and seniority. BJP's Bihar leaders are also unhappy that Paswan has been soft towards the principal opposition Rashtriya Janata Dal and its jailed leader Lalu Prasad, and wonder whether Paswan will make a switch at the time of elections. Paswan has been adept at seeing how the electoral wind blows, and he has found accommodation in the governments of BJP, Congress and Janata Dal.