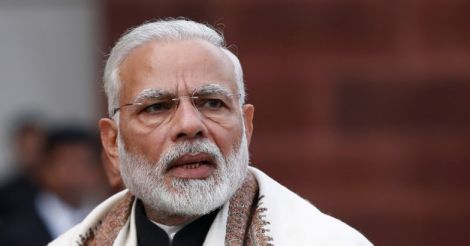 Four rivers in the country are giving a headache to the central government due to political and infrastructural reasons. Reuters

Prime minister Narendra Modi has discovered river waters are treacherous, even when they are dry in the summer months. Four rivers in the country are giving a headache to the central government due to political and infrastructural reasons. The most virulent issue has been the tug of war over the Cauvery waters between Karnataka and Tamil Nadu.

The Supreme Court had clearly asked the Centre to notify a scheme for management of the Cauvery waters between the two warring states as well as Kerala and Puducherry after finally settling the dispute which had flared 44 years ago.

The bench headed by chief justice of India Dipak Misra, knowing the political pulls and pressures had set a deadline, but Modi found himself paralysed as the implementation would have an adverse reaction in Karnataka, which is facing an election.

The BJP did not want to hand over another cause to chief minister Siddaramaiah, who was already crowing over the final order which gave less share of Cauvery waters to Tamil Nadu and more to Karnataka.

Modi also depends on the support of Tamil Nadu's ruling party AIADMK, especially in Rajya Sabha where BJP does not have a majority. AIADMK which is willing to bark but afraid to bark kept up the din in Parliament demanding constitution of a Cauvery management board, which will control the releases of water from Karnataka's reservoirs.

While in parliament the BJP cleverly used the AIADMK's noisy members to prevent discussion on incriminating subjects like bank scams and Dalit atrocities, the government told the court it cannot implement a scheme until Karnataka elections are over. An angry Supreme Court gave a last deadline before the voting day in Karnataka, but indications are that government will try to delay the issuance of the scheme.

The BJP is also caught in another trap over the release of waters from Mahadayi river for drinking water to five north Karnataka districts. The Mahadayi originates in Maharashtra, flows through Karnataka into Goa, where it becomes Mandovi river. Goa has been unwilling to share with the water, and there is an inter-state river dispute tribunal.

As the farmers of drought-affected Karnataka districts are on a three-year-long agitation, Karnataka BJP managed to get a letter from Goa chief minister Manohar Parrikar (before he went to the United States for treatment) offering to help the big neighbour. But when small parties which help Parrikar to survive as chief minister, protested on the release of Mahadayi water, Parrikar went silent. Now Siddaramaiah is on the offensive demanding Modi to dictate the BJP chief ministers in Goa and Maharashtra (Devendra Fadnavis) to agree to release water to north Karnataka. It has become a hot electoral issue in Dharwar, Haveri, Belgaum, Bijapur and Bagalkot districts which send over 50 MLAs.

Another river dispute which can cast a shadow on two assembly elections is the row over sharing the waters of Mahanadi, which flows into the Bay of Bengal, like the Cauvery. Odisha, ruled by Biju Janata Dal, has been complaining that upper-riparian state Chhattisgarh is now impounding Mahanadi waters through new dams and barrages, reducing the flow into Odisha. Chhattisgarh is ruled by BJP's Raman Singh, who faces a tough election this winter for what will be his fourth term as chief minister.

While Raman Singh wants the Centre to support him, the Odisha BJP led by petroleum minister Dharmendra Pradhan is worried that the state chief minister Naveen Patnaik will get away with the credits, if the Centre sides with Chhattisgarh. Odisha has assembly elections along with Lok Sabha elections in May 2019, and BJP has set a target of coming to power in the state. But Modi and his advisers have not found a solution which can be a win-win situation in both the states on Mahanadi water sharing.

Modi is frustrated for non-political reason with the slow implementation of the plan to clean up Ganga river, which flows through his Lok Sabha constituency Varanasi. Even though the Ganga river subject has been given to highways minister Nitin Gadkari, and three important states through which Ganga flows - Uttarakhand, Uttar Pradesh and Bihar - are ruled by NDA, the grand action plan has yet to take off. The criticism of non-implementation may affect votes too in the Gangetic plains which had voted heavily for Modi four years ago.