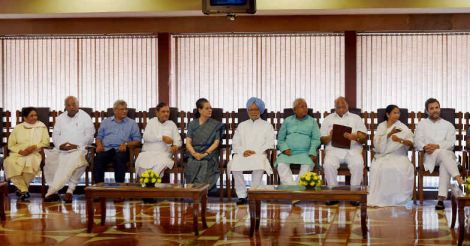 Congress leader Sonia Gandhi chairing a meeting of the opposition leaders to discuss the strategy for the upcoming presidential elections in New Delhi. File photo

Events in New Delhi and Hyderabad over the last few days have brought both positive and negative vibes for the dreams of opposition unity for taking on the might of  the Bharatiya Janata Party (BJP). The election of Sitaram Yechury for another term as the CPM general secretary and the endorsement of the Yechury line have come along with the news of two major regional parties - DMK and Trinamool Congress - refusing to endorse the Congress demand to support the impeachment move against Supreme Court chief justice Deepak Misra. The motion had the support of some other regional parties, but the rejection of the motion by vice-president Venkaiah Naidu at its admission stage itself has created a little bad breath.

The Congress managers have learnt the limit of their persuasive powers as the DMK, a potential coalition  partner in Tamil Nadu for Congress, has questioned the rationale in attacking the Supreme Court chief justice. But  some critics say DMK and Trinamool Congress are concerned about cases pending in appeal against their leaders. There are others who feel pro-impeachment leaders lacked the patience of Ahmed Patel who was Sonia Gandhi’s political secretary for two decades.

The alliance management politics of the Congress has been unsatisfactory after the ill-fated seat-sharing arrangement with Samajwadi Party in Uttar Pradesh a year ago. The Congress failed to stitch either pre- or post-poll alliances in the elections to a few north-east states this year, especially in Meghalaya and Nagaland, where the BJP successfully exploited hung assemblies to form governments.

Rahul Gandhi has taken over as the Congress president, but Sonia Gandhi continues to head the United Progressive Alliance, which has shrunk from the heydays of Manmohan Singh’s prime ministerial days. Patel had handled regional parties inside and outside UPA on behalf of Sonia, who was the sole power centre.  But Rahul has depended  more on parliamentary leaders Ghulam Nabi Azad in Rajya Sabha and Mallikarjun Kharge in Lok Sabha for parliamentary coordination, with mixed results. He is also caught in fighting elections virtually in direct contest with BJP in Gujarat (a close second), Karnataka (a vigorous contest with JD(S) as the third wheel in south Karnataka) followed by the winter battles against BJP in Rajasthan, Madhya Pradesh and Chhattisgarh. Thus the time for seriously thinking of electoral arrangements has not yet come, as Rahul Gandhi has yet to appoint all his state in-charges, and also appoint a successor for Ahmed Patel.

Yechury, after Hyderabad, is a stronger man for his second term as CPM general secretary. He can punch above his weight because of the wide rapport he enjoys with the leaders of even the smallest parties  in the country. His two-term experience in parliament and the leading the role he played with Prakash Karat, A B Bardhan and D  Raja in the UPA-Left coalition will give him greater reach and clout.  Since talking to the Congress is permitted after the party’s line of action was adapted at the Hyderabad congress, there will be less carping from his colleagues. The gap between Karnataka and winter elections would give Rahul and Yechury space and time for working on a grand coalition, which will be watched and countered by Narendra Modi.