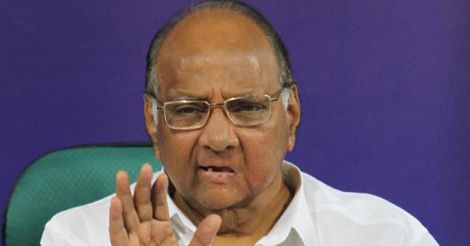 The huge turnout of dignitaries from across the political spectrum for the 75th birthday celebrations of Sharad Pawar in Delhi has triggered speculation that the Maratha leader may emerge as a consensus candidate for president's post when Pranab Mukherjee completes his first term in 2017.

Pawar laughs off this theory saying that he has been often projected as a PM earlier. Pawar says Nationalist Congress Party (NCP) does not have the numbers to even project his name.

The Nationalist Congress Party (NCP) has just a dozen MPs out of 780 in Parliament apart from 40 MLAs in Maharashtra.

The United Progressive Alliance, to which NCP belonged before the Maharashtra Assembly elections of 2014, do not have enough numbers to get its own nominee through.

Even if the UPA had the numbers and the NCP was still part of it, the Congress, which dominates UPA, would not be enthusiastic about projecting Pawar, especially after the comments he made in his autobiography published at the time of the 75th birthday celebrations.

In 2002, the NDA did not have its own majority, and had to seek a consensus. Vajpayee, who wanted to take along his NDA coalition partners and others projected the name of Maharashtra Governor P. C. Alexander, but Congress, the main opposition party led by Sonia Gandhi, was not enthusiastic about the proposal.

Then Samajwadi Party president Mulayam Singh Yadav, who was the Uttar Pradesh CM then, proposed the name of technocrat A P J Abdul Kalam, who was immediately accepted by the NDA as its candidate. Kalam later became the President.

However, the UPA which ruled between 2004 and 2014 had its own party leaders get elected, by exploiting the divisions in the electoral college.

Rajasthan Governor Pratibha Patil won in 2007 and the then finance minister Pranab Mukherjee had a smooth run to the Rashtrapati Bhavan in 2012 despite some drama by Mamata Banerjee.

Mamata wanted Kalam to come out of retirement, but Mulayam who had backed Kalam in 2002, preferred Pranab, dashing Mamata's hopes.

When presidential elections are held in 2017, the NDA will be the largest group in the electoral college which comprises members of parliament and all state legislatures, even though the weightage of votes of an MP is much more than that of MLAs and MLCs, which again varies from state to state depending on the population.

Out of 780 Members of Parliament, Narendra Modi-led NDA will have around 400 MPs, even if the BJP does not do well in major states like Uttar Pradesh, Tamil Nadu, West Bengal, Kerala and Assam that go to hustings before the presidential polls.

On the other hand, the Congress-led UPA will have around 130 parliamentarians while other parties, which are not directly aligned with either BJP and Congress, will have a strength of around 220. Thus NDA will have a clear edge.

In the states, the situation would be more fluid. The BJP and its allies control large states like Maharashtra, Madhya Pradesh, Gujarat and Rajasthan. The largest state controlled by Congress will be Karnataka. The Bihar Assembly is controlled by the Grand alliance of Rashtriya Janata dal, JD(U) and Congress.

It will be interesting to watch the fate of Samajwadi Party, Trinamool Congress and Aiadmk, which control three big states. If BJP makes huge gains in Uttar Pradesh, its tally for presidential election will get a further boost.

Modi would like to achieve what Vajpayee could not – A BJP leader as President of India. He has a wide range of leaders to choose from including senior ministers like Rajnath Singh, Sushma Swaraj and Venkaiah Naidu, veterans reigning in Raj Bhavans like Ram Naik (UP), O.P.Kohli(Gujarat) and the tribal woman leader Draupadi Murmu (Jharkand).

But much will depend on the electoral and other fortunes of BJP. However, if the non BJP opposition were to force its own candidates, then incumbent Pranab Mukherjee would have a far better chance than Sharad Pawar, as Mukherjee enjoys support of NDA and many parties of the Third Front. The this guessing game will assume serious tones only after the Uttar Pradesh Assembly elections.

Tailpiece: The Congress has continued with the practice of asking the senior most working committee member to stand surety when the party president had to get bail from a court. A.K.Antony stood surety for Sonia Gandhi in the National Herald case.

In 1997, Pranab Mukherjee as the senior-most working committee member, had stood surety to party president P.V.Narasimha Rao, who was charged in the Lakubhai Pathak cheating case.

Earlier, a medical team comprising five doctors had examined the Kalamassery legislator who is currently...