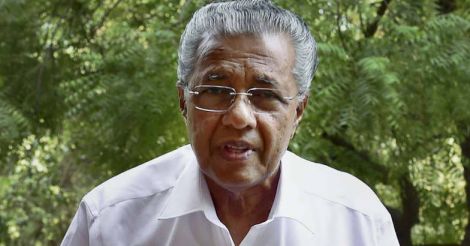 One knows not what comes to your rescue at the most unimaginable junctures. How else could a symbol of faith, a cross to be specific, extricate a chief minister, a staunch non-believer, from the Munnar predicament.

The chief minister has been wriggling himself out of the most unpleasant circumstances since the government assumed power 11 months ago.

He now treads a narrow and treacherous path as any open endorsement of the book-backed actions of the Idukki district authorities would put party functionaries on his wrong side. Discontentment is on the rise as the chief minister assumes Buddha pose and refuses to come clear on the eviction drive in the hill town.

Munnar has never been an easy trek for the CPM and the LDF. When V.S. Achuthanandan as chief minister deputed a three-member special team to rid the place of encroachments during the previous LDF government's term, it had caused much heartburn and the government drew a lot of flak for the way the drive was carried out. But, the move was widely welcomed as no one had an iota of doubt on the intentions of the then chief minister.

As another Munnar eviction drive begins, the Pinarayi government finds the trust deficit hard to tackle.

Also, the CPM is losing its political face as the revenue minister, a CPI man, has time and again endorsed the actions of the district administration.

The CPI, the second largest ally in the LDF, is apparently gaining the rightful political mileage too with its ministers and the party chief, Kanam Rajendran, being on the same page on most issues. To add to the CM's woes, revenue sources had reported that CPM's Munnar legislator S. Rajendran had encroached upon government land.

To chime with this, the party's district secretary stated that the collector and the subcollector had been 'brazen and arrogant' and had overstepped their mandate. Sources say the party is finding it difficult to explain the dichotomy in its stance to the ranks.

Also, the party has been clinging to technicalities in an already-failed bid to divert attention. The smoke screen and high jingoism of acting only against 'large encroachers' is not getting it any empathy. On the contrary, the people are alarmed at the disgusting reluctance of an elected government to act against a blatantly illegal act.

As the whole of the state turns to the chief minister for some clarity, he was literally found clinging to a cross. To tell the tale, the eviction team on Thursday overturned a large cross placed on some encroached land.

Television channels aired videos of the cross being removed from the spot.

The chief minister promptly condemned the action and said the cross should have been left untouched and the authorities should have just placed a signage stating that it is government land.

So, here is the time we witness the irony of a beleaguered government of proclaimed rationalists identifying a misplaced cross as the most important aspect of an eviction drive.

How else could one explain the cross all of a sudden becoming the chief minister's favorite prop?