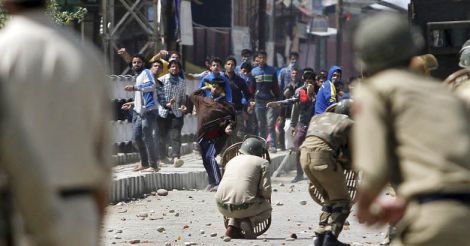 Security forces in Kashmir are stumbling on a strategic combat issue. Scout parties and advance skirmishers of the army and the Central Reserve Police Force (CRPF) are faced with stone-throwing mobs comprising young men and women. The army is yet to draw up a field strategy to counter these non-combatant but prickly mobs.

The 'combat and handling' principles of the army vastly differ from the ones of the police and the CRPF. The army is trained and build to deliver 'damning and suppressing' fire to inflict maximum damage. This is why the army is kept out of regular law and order duties and civilian crowd-control.

Anyhow, in a heterogeneous canvas like India, there are geographies where the contours of the civic and the subversive are interwoven. Such situations, as in Kashmir and in some places in the north-east, can be nightmarish to the security forces.

In Kashmir, the army cannot open fire on its people even if they meticulously thwart the forces' legitimate efforts to crack down on terror.

Policing, in forward-looking and democratic places, is now increasingly focused on conflict resolution and preemptive, participatory community action. So, handling non-combatants and combatants on the same battlefield may need a fine balancing of army and policing doctrines.

For desired results, it is essential for the state to detach the elements of civilian unrest from the larger terror mosaic. This needs the redrawing of the combat doctrines and the measured merger of policing and combative action.

Plastic bullets to be used for crowd control in Kashmir

The action on the civilian front should start at the community level with the administration and the police actively engaging the youth in productive action. Also, the government should take a cue from the successful implementation of work-and-wage programs like the Mahatma Gandhi Rural Employment Guarantee Scheme in states like Kerala and Tamil Nadu.

The army's social engagement has often come in for praise but this is often a dressing on the wound rather than curative. The burden of soothing the nerves and keeping the citizens attached to the national fabric is the duty of the state. Ensuring sustained civic engagement will be too much of work for a combat force already burdened with varying levels of conflict handling. This does not mean that the social engagement of the army is pulled to a naught.

Coming back to Kashmir, we see television footage of unruly mobs manhandling, prodding, and cooing at hapless jawans. Some of the more adventurous ones even go to the extend of kicking a jawan's helmet like a football. The jawans walk away, as if they are destined to this fate. There is a potboiler where the anti-hero uses a pack of dogs to intimidate the protagonist who tames man-eater tigers, if you get the drift.