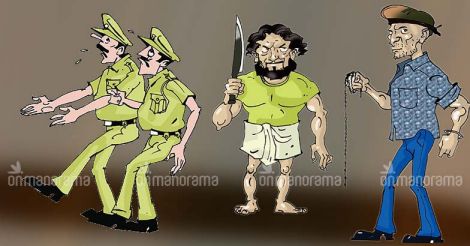 The murderous and brutal 'third arms' of cadre parties have of late been part of various non-political crimes in Kerala. The suspected involvement of Democratic Youth Federation of India (DYFI) Edamon unit secretary Niyaz in an honour killing case in Kottayam is the latest incident in point.

Investigators familiar with the use of party cadres for political score-settling said the miscreants were 'on-call' hit-men with sworn allegiance to the respective parties. They doubled up as 'local' go-to boys for traders and others who needed a bit of muscle for their trade.

A now-retired investigator said there were infamous party pockets even in urban centres like Thiruvananthapuram where such gangs operated in the late 90s. One such gang which operated from Peroorkada in Thiruvananthapuram doubled up as a party's all-equipped hit-men. They fitted long swords into the crash guards of their 100-cc bikes, the hilt and the cross-guards jutting out of one side, right below the handle-bar. This was the recognizable imprint of a gang man then, he said.

Special squads: the savage arm of Kerala police in action

They were also tasked with organising party meetings, ensuring cadre turn-up for gatherings and the commandeering of logistics like chairs and banners. The gang leader was a wiry little man who suspected his wife to be in an affair with another gang leader. Sources said the Peroorkada gang threw country bombs at the other man as he was being taken out of the Attakulangara sub-jail in the capital.

It was a mutually beneficial existence - one which equally benefited the cadre parties and the hit-men. The parties found things moving fast as the gangsters infused terror in law-abiding citizens. Small businessmen, the usual and hapless preys, gave away money on demand to avoid trouble. The gangsters got the privileged 'overlook of law'.

Another gang which operated out of the Pettah and Pattoor areas of Kerala capital too owed their allegiance to a major political party. A prominent political leader was the de facto boss who even had won a toll collection contract in a benami name. The toll gate, manned by the leader's men, near the capital city, was a place of notoriety. The Pettah police station at one time received distress phone calls from many people every day but most of the callers were reluctant to register complaints fearing violent action by the gang.

An officer who was for long attached to the Pettah station said the gang comprised youngsters whom the police could have quelled with a strong reprimand. Later, after many high profile complaints, the police closed down the toll gate and the political leader abandoned his explicit business interests.

The officer said the youngsters had a history of turning out to be dons themselves, taking up paid assignments like the one in Kottayam.

The refusal of parties to exit their violent methods has spawned a generation of young men who are being pawns in the hands of the powers be. It has not yet dawned on the parties that a generation which thrives on the benefits of artificial intelligence can instantly spell doom for those who fight it out on the streets real-time .

While Kajal can be seen in a blue lehenga, Gautam was seen wearing a black kurta.