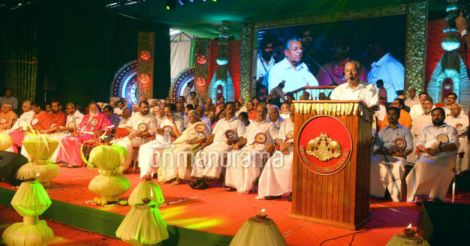 The glitter of the diamond jubilee celebrations of the formation of unified Kerala state has been marred by an avoidable row.

The row is related to the invites, or lack of it, to the governor P. Sathasivam and three former living chief ministers of the state – A.K. Antony, Oommen Chandy and V.S. Achuthanandan.

Protocol issues have been cited for the exclusion of the governor, but the fact remains that the government could have easily found a way out, if it wished so, to accommodate the governor.

Probably, after Raj Bhavan came to know that the government did not have such intentions, the governor, who had postponed a private trip by a day, flew to Chennai.

A damage control exercise by speaker P. Sreeramakrishnan, with the purported aim of briefing the governor, did not bear fruit.

The governor's office apparently informed the speaker that he would be given an audience once the governor is back.

Clearly the message has been driven home that the gubernatorial office wasn't pleased at all with the way the government handled the issue.

The governor's office views this as more of a propriety issue rather than a protocol issue.

Then came the charges that three former living chief minister's were not invited or were not given adequate importance befitting their stature.

Without going into the merits of charges and counter charges being hurled by government and opposition parties, one aspect is crystal clear. The government bungled in organizing such an important event in the state's history.

The only other probable explanation for such a goof up is that it did not think that the presence of the governor or former chief ministers was necessary. If that was the case, it should have unequivocally made known its stance. That was also not forthcoming.

The only clarification from the government's part came from the chief minister who said the governor's presence would have triggered protocol concerns.

Now, again there is a lack of clarity in that statement. What was the CM trying to convey? Perhaps we can only assume that when the governor is on dais, the number of persons with him would have to be curbed to 8-11.

Even if that was the case, it should have been clearly conveyed to the Governor in advance and briefed to the media.

The root of the issue is exactly that. The government does not subscribe to the view that the media, and through it the public, should be explained about its decision making process.

Remember, this government has done away with the customary briefing after cabinet meetings mostly scheduled every Wednesday. It instead opts to convey its decisions through press releases. But the issue then is the media is denied the right to know what prompted the government to take such decisions.

There is an information deficit in the state. And that is the fault line from where speculations originate, putting the government in a fix.

Perhaps, the top brass of the government should consider themselves more as public servants rather than party activists to unshackle this cocoon of secrecy that is bringing disrepute to governance.