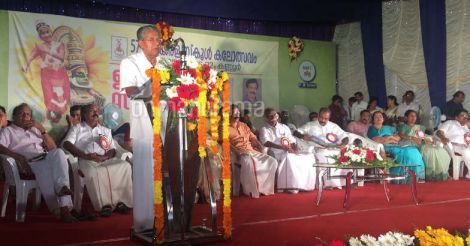 Kerala chief minister Pinarayi Vijayan made it a point to mention attacks on artists and undeclared gags on creative expression by regressive forces when he addressed a large crowd as curtains rose on the Kerala State School Youth Festival in Kannur on Monday.

As expected from a CPM strongman, Pinarayi unleashed a scathing attack on Sangh Parivar outfits citing the ideological and physical attacks on intellectuals and artists like Kalburgi, Govind Pansare, M.F. Hussain and Perumal Murugan. Pinarayi also mentioned the verbal attacks on filmmaker Kamal and writer M.T. Vasudevan Nair by some BJP leaders as the onset of Fascist trends in Kerala society. However, one must also take note of at least one name that the chief minister did not mention - that of writer Kamal C. Chavara.

Fed up with police harassment, Malayalam writer burns his novel in Kozhikode | Video

Pinarayi delivered his flamboyant public speech in the CPM stronghold, a day after Chavara burned his novel in Kozhikode in protet against police harassment. The writer was forced to commit the metaphorical suicide as he was 'fed up with police action' after he was charged with sedition over some portions in his novel 'Smashanangalude Nottupusthakam.'

Chavara was detained by the police last month but let off after a day following public outrage. While releasing him, the police had said there was no case against him; however, he alleges that the intelligence sleuths continue to frequent his house and intimidate his family.

No wonder Pinarayi did not feel the need to mention Chavara's name because in this case the guilty are the home department and the ruling party. The writer even said he wanted to burn the CPM's flag, but did not have the courage to do it. After that statement, it would be unimaginable to think that the CPM, known for its vindictive stances, would come out in support of him.

However, one must also remember that the entire book-burning incident could have been avoided in the first place if there was proper intervention from the government's side.

The government and the CPM remained unbelievably silent even after the writer announced his decision to set his book on fire in protest against police harassment and governmental apathy.

The very announcement should have shocked the conscience of a party and government which call themselves the saviours of human rights and freedom of expression, whatever be his political stances -- if he has any.

The calculated silence and the selective amnesia that CPM leaders and the chief minister himself showed in Chavara's case sticks out like a sore thumb even as they keep citing the aforementioned artists to question the assailants of democracy and dissent.

Pinarayi mentioned Perumal Murugan's name at a time when the Tamil writer has returned to writing following a significant court order. What the chief minister seems to be unaware of is that a Peruml Murugan has just been born in his language, and during his regime.