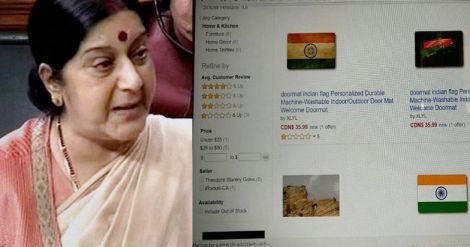 Should external affairs minister Sushma Swaraj have used her Twitter handle to issue a warning to online retailer Amazon to withdraw from its stores a doormat with an Indian flag printed on it? Many think she should not have used India's so-called soft power so heavy-handedly.

For the record, Sushma is not alone. US president-elect Donald Trump has done it so many times since being elected. And to good effect. All the companies he targeted with his tweets – from Lockheed Martin to Toyota – have fallen in line and promised to change.

To those accustomed to the cumbersome ways of traditional bureaucracy, conducting governance on Twitter may be sacrilege. But to many Indians agitated about the offending product, there was no better way to do this.

Amazon must tender unconditional apology. They must withdraw all products insulting our national flag immediately. /1

If this is not done forthwith, we will not grant Indian Visa to any Amazon official. We will also rescind the Visas issued earlier.

Well, governance is also about expectations. A large chunk of the people on Twitter, the ones who are driving change in India, America and elsewhere in the world, are different from the voters of, say, 10 years ago. They are informed, opinionated and want instant solutions to their concerns. The dawdling ways of traditional government are not theirs.

Once word got around of a doormat with an Indian flag on sale, they would naturally have wanted the people they elected to power to respond and, more important, bring visible change – instantly. There is no better way to do this than on Twitter. Yes, calling the Indian envoy in Canada and delivering a stern message to Amazon away from the public eye would have worked too. But was that enough?

The BJP's voters want the action to be visible, and they want Amazon to never to do it again. Even better, the sympathetic elements in the government (you know, the ones who love to deal under the table) would have no quarter if Amazon quietly forgot its promise and did something like this again. Amazon knows better than anyone else that the ether has memory and a phenomenal one at that. And it is like copying a warning email to an erring employee to the whole department; the message gets across to all.

Those who advocate acting behind the scenes are advocating the rules of a playbook that is being discarded across the globe. They mostly belong to the set of voters from a previous century who were happy to elect a Congress government that hardly cared about India or its nationalistic sentiments. The BJP's voters are a vocal lot and want to show the big companies that India's pride matters, and want the Indian government to throw its weight around when it is needed. Like China. Not play by the rules of a west-dominated world that is fast fading into history. Let's not forget that it is the rules and norms of governance of that sad era that put the Union Carbide chief on a flight out of India after the Bhopal tragedy. And that is why the BJP under Narendra Modi was elected to power.

Why carry out the business of government on Twitter at all? Well, who said it shouldn't be? Swaraj recently tweeted that any Indian abroad facing trouble can tweet and tag her. Isn't that a neat way to short-circuit our cumbersome Raj-era bureaucracy that is insensitive to the average Indian's problems – in India and abroad? There have been several instances when she has helped Indians in trouble abroad – and used Twitter to good effect for that.

Hasn't railway minister Suresh Prabhu made the Railways – another colonial era behemoth – responsive to people's problems by being on Twitter and forcing the railway officials to be on Twitter? If that is par for the course, what Sushma did with Amazon too is.

The rest is just politics – from those still nostalgic of an almost bygone era.