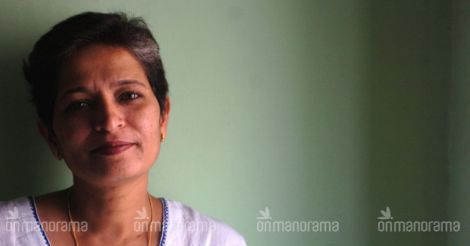 It was sometime in 2004 when Gauri Lankesh visited our house in Shimoga, where my father was then posted. It was a chilly evening, and some swigs mixed over ideological discussions were only an excuse for my dad and his literary friends to spend some quality time with one of Karnataka’s firebrand journalists.

As the deliberations unfolded on the terrace of our old quarters, I remember pondering about a time in future when I would partake in such intriguing conversations with intelligent people. I know little about the ideas that were exchanged but after they were over, she had stopped by to say goodbye.

She could have been just over five feet, but with her short hair and sprightly twinkling eyes, she had a young teenager (I was just 13 then) smile back at her during late hours of the night. For my timid mother, she stood out as opinionated and gutsy, but for an aspiring girl like me, she was the very face of a fearless woman who stood out in a man’s world. She remained a good friend of my dad until her last days.

Recalling many such terrace talks, my father shared with me how he thoroughly enjoyed arguing with Gauri Lankesh. Though her political inclinations were left of centre, she would sportively rebut any ideological differences that arose during the discussions. 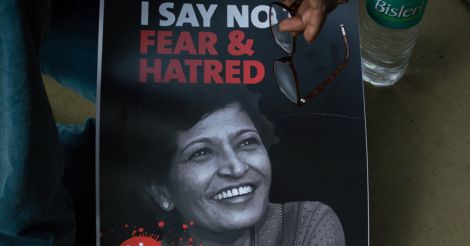 The brutal assassination of Gauri Lankesh is the latest blow on the shrinking press freedom in India. Photo: Getty Images

Her literary sensibilities coupled with her journalistic finesse in single handedly anchoring ‘Gauri Lankesh Patrike’ (to which my father contributed articles and poems) to success were more than impressive and praiseworthy. The last time my father spoke to her on phone, he remembers how they had a slight tiff about the Lingayat movement that’s urging to declare it as a separate religion.

A sense of shock numbed me when I first read a notification on my phone that informed of Gauri Lankesh’s cold-blooded murder by unidentified miscreants a few days ago. I recollected her bravely led life and all that she stood fighting for. What was she gunned down for? Her liberal leftist ideologies? Her openly advocated campaign that sympathized with naxals and urged them to give up arms? Her being a courageous scribe who spoke her mind? The incompetent jury is still out.

Also read: Lest we forget: A revolutionary legacy that deserves to live on for generations

It’s deeply disturbing to watch so called “independent news channels” demanding evidence from people who are doubting Gauri’s murderers to be right-wing extremists. And how ironical of so called “intellectuals” screaming on multi-screen news windows about Gauri Lankesh’s killing being politicized.

India as the largest democracy in the world has forever took pride in existence of a free speaking press that has the power to question, critique and dissent. Remember those Emergency days, when Goenka’s Indian Express protested the attempt to stifle press by bringing out a blank front page? But unfortunately today, it has come down to journalists being shot and slaughtered for mere open-mindedness and sheer difference of opinions. The popular theory seems to be stand down or take bullets. Should the choice be so hard for the fourth estate, which has the moral responsibility to maintain a well-informed electorate? 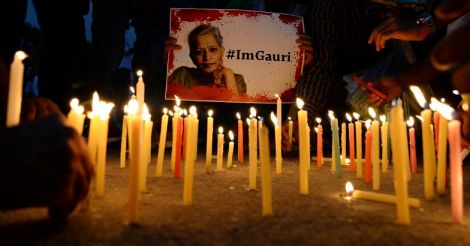 The bigots who put those bullets in Gauri Lankesh’s forehead did not just take a shot at a dare-devil woman journalist, it was indeed a shot at free speech. Photo: Getty Images

A comprehensive report on free speech issues in India released last May by The Hoot says 54 recorded attacks on journalists took place over a period of 16 months from 2016 to mid-2017. India has stumbled three points below to 136th position in The World Press Freedom Index published by Reporters Without Borders. The brutal assassination of Gauri Lankesh is the latest blow on the shrinking press freedom in India.

The bigots who put those bullets in Gauri Lankesh’s forehead did not just take a shot at a dare-devil woman journalist, it was indeed a shot at free speech. Rest in peace, you - undaunted soul! You have surely inspired many to keep the good fight going.

(The author is a Bangalore-based journalist, trekker, traveler, and a tea lover.)