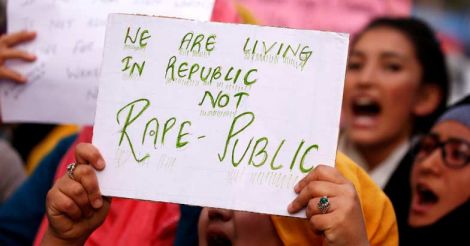 The streets are full of people once again, voices are louder than ever, again.

While the nation collectively wields its strongest weapon—its voice—to express myriad emotions including disappointment, rage and agitation, all the while demanding severe punishment for the accused who raped and murdered an 8-year-old girl in Kathua, certain things still remain unsaid or unrecognised.

There’s no denying that the Kathua rape incident puts away one’s faith in humanity, but it’s also important to remember that this isn’t the first time the nation has stood on its toes pleading for justice. The streets are full of people once again, voices are louder than ever, again, and this time around, cameras are angled on tiny hands holding up placards that read ‘Is it me next?’ ringing in the immediacy of kick-starting the much-needed conversation around the prevention of crimes and protection laws for children in the country.

Over the past 10 years, the country has been witnessing a year-on-year increase of around 19% in crimes against children (NCRB data), which is no negligible shift. Every 15 minute, a child is subjected to sexual offence in the country (CRY analysis of NCRB 2016 Data). And yet, the question remains whether we are doing enough in preventing crime against children, making sure that all spaces which children access are safe and all of our duty bearers are taking accountability to make the world a safer place for children.

The many discourses on prevention of crime are still waiting to happen, even as Nirbhaya was subjected to brutality, or when Pradyuman was attacked in a place where safety should not have been compromised; the country's collective conscience has been time and again forgetting to make demands to make spaces congenial to children.

The government’s move to introduce capital punishment for rape of girls below 12 years seems to be more of a reaction to the ongoing outrage than a well-considered long term solution to the growing violence against children. The diagnosis of the situation is off beam, for it doesn’t seem to be taking into account the victim’s perspective; justice to the victim doesn’t need to be synonymous with punishment of the highest order. If the perpetrator is someone known to the victim, as is the case in most of the rape incidents which are recorded in the country, there is a possibility that reporting of such cases would go down. What’s more, the life of the victim is more under threat in this scenario, as there will be an attempt to shut the child down completely now that the sentence for rape and murder weighs the same for the perpetrator.

Talking about countries that have imposed death penalties, 2017 saw a total of 993 executions  carried out by 23 countries (data quoted by Amnesty International), where China takes the lead followed by Iran, Saudi Arabia, Iraq and Pakistan. However, there’s no data that conclusively states that capital punishment would deter crime.

There are numerous legislations for child protection, however the question is, are they frequently gauged, amended and made stronger? When NCRB says that more than 50 children get raped every day in India, the deficit in planning and inadequacy in reserving enough resources for prevention of crime against children becomes very evident.

Usually, the spaces that a child accesses more are home, neighbourhood, parks, school and transit to school or other places. There is a pressing need to bring these places under the purview of stringent protection protocols and training the personnel to be attentive to the many gaps in the system and processes. We have to weave a narrative that speaks of transformational changes within society that looks at creating safety-nets around children; one that looks at all these spaces accessed by children with an angle of vigilance as well as timely response. It is also important to build community level systems and a healthy response mechanism. We need investment in value-building, altered perceptions about children and their needs, purge society of gender biases, and introduce the duty bearers to a whole new culture of holistic child protection. CRY has been forming vigilance groups at the level of communities, enabling the members to have good understanding of child rights and its preventive aspects, and encouraging responsive action against missing children or crimes against children.

A significant step in the process is to evaluate children’s primary contacts with much scrutiny, simply because 95 per cent of times, the perpetrators of sexual offence are people known to the victims (NCRB, 2016). This is a crucial point to note where the affected child’s family might give precedence to notions like ignominy and honour over a scarred childhood. Even with the implementation of Protection of Children from Sexual Offences Act (POCSO Act) 2012, only very few of such cases get reported. POCSO offers a robust mechanism, however, weak implementation hinders the process; the nature of victim support, evidence collection, speedy intervention required from the judiciary still remains a struggle, especially in remote and smaller districts. A system overhaul to combat the inefficacy is much needed at this point.

It's imperative to contextualize laws of child protection, not just in the aftermath of a horrific incident, but at all times. Only with a preventive framework and an increased investment for child safety, equipping people at all levels who associate themselves with children, exponential increase in reporting followed by thorough investigation and decisive action, can we build a system that is benign to children and envelops them in a protective shield.

(The author is the regional director (North) at CRY – Child Rights and You.)