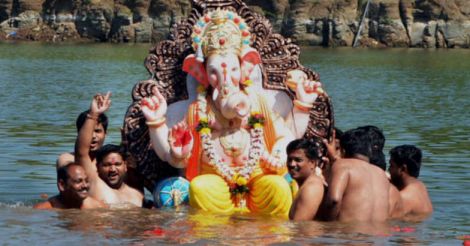 New Zealand is known for its natural beauty, cricket and All Blacks. But this Indian business executive realized the essence of Hinduism there, through Ganesha.

Last month while the world celebrated Ganesh Chathurthi, there was a debate going on in India mostly among the so-called educated Hindu middle class. On the surface of it, their position was simple: Ganesha is a Hindu god and the idea of Ganesha and its depiction is also owned by Hindus and it should not be meddled with.

In one instance, an engineer-turned-artistic photographer friend who was busy trying to get a shot of a kingfisher taking off from a pond in the bushes in northern Kerala suddenly remembered it was Ganesh Chathurthi and sitting in the bushes, used his sophisticated hi-tech camera to quickly make a caricature of Ganesha -- the ears formed by distorting the camera body, the nose using the zoom lens and tip of the lens hood -- and sent it around on social media wishing Ganesh Chathurthi to his friends. What followed was an avalanche of anger bordering abuse. He was stumped, in part because he happened to be a non-Hindu and it was suggested that he purposely mocked Ganesha. The angry responses questioned whether members of other faiths would accept it if anyone made fun of their holy books or gods and broadcast those on social media.

The ultra-orthodox and fanatics may even issue fatwas against such deemed offenders -- as happened in the case with Salman Rushdie.

Herein lies the differentiation and beauty of Hinduism and one of India’s greatest contributions to the world. Hinduism and its offshoot Buddhism are personal experiences at a deeply emotional level; they are not a religion per se. The sages, saints, divine incarnations and the gods of Hinduism, and even the temples and mutts are symbols of human virtues and have to be experienced at a personal level through an individual's emotive connect with the idea of God.

This collective emotive connect of people of all walks of life and religions around the world with gurus, demigods and gods of India makes the Hindu religion a great symbol of human virtue on earth. Hinduism always welcomed spiritualists and those seeking the meaning of life to experience it.

My own personal experience of Ganesha came after I started living outside India. As a child growing up in India, my gods including Ganesha mostly lived in temples and pooja rooms, but I realized the omnipresence of Ganesha in a place least expected – in New Zealand where I thought only the mighty All Blacks rugby players and good cricketers lived.

It was on a sunny cold afternoon -- the day before Lady Diana was killed in that horrific car accident in Paris -- that Ashok picked me up from Auckland airport and drove me to the farm on Titi road in Mauku. Steering through the rugged driveway, surrounded by lush green grass fields where cows were grazing, he stopped the car at the sharp curve driving in towards the front of the east-facing farm house -- as if someone's asked him to stop there. He said to me, "all right, let us look at the Ganesha first," got out of the car, walked a few steps toward its back, and started staring at something that I could not see from inside the car. Realizing he is not coming back to the car any time soon, I also got out and walked toward him saying, “it is bloody cold, man."

It’s only then that I noticed Ashok was standing in front of a large piece of natural rock facing north, with the beautiful spring sun shining on its back. When I was about a meter away from Ashok, he turned around and looked straight into my eyes, his eyes glowing with an unfamiliar, yet calm and mystic energy. He did not say anything to me. I looked at the piece of rock in front of us and recognised instantly the familiar contours -- the trunk, tusks, ears, eyes and forehead of Ganesha – and whispered, "Yes, Ashok , I can see Ganesha.” We stood there without talking to each other for few minutes, and Ashok got in the car and drove off, while I continued gazing at the tranquil manifestation of Ganesha, stunned by nature's beauty and engineering precision.

Born in New Zealand, Ashok travelled to India many times. The last time was in December 2007, when he spent most of his time in my mountainous village in Kerala. He would sit under the gum tree all day soaking in the cool breeze, where he read a number of books including the Koran and the Autobiography of a Sadhu.

Ashok was my close friend, soul-mate and the best doctor I had ever known. He told me that among all the demigods, gods and Gods with a capital G, he liked Ganesha most, because Ganesha understood the travails of human life, its conflicts, its preciousness and its requirement to have good KAI and INU -- food and drink in the local Maori language. Ashok's narrative of Ganesha stayed with me, and later rescued me from the dystopian lows in my own personal life. That narrative is so powerful, beyond all so-called religious beliefs and is that the idea of Ganesha, its engineering, construction and deconstruction are all part of Ganesha's will and beauty, enjoyed at various levels of individual realizations. Ashok taught me how to look for gods in tranquillity, wherever you are in the world, when you want to experience the idea of god.

Ashok died on 12 February, 2012, at the age 51, after returning to Auckland from the jungles of Thailand where he experienced Buddha's penance, pain and the end of sufferings. That was the time I lost my cool with the gods, and shouted and cried out to them.

Later in November 2013, while watching the constantly burning funeral pyres on the banks of the Ganges in Manikarnika, I felt a strange sense of calmness settling on me, the annihilation of the melancholy that was part of me, which I then realized was a form of ego. Then came the mystic smell of burning incense and human flesh, and I saw the contours of Siva in the burning funeral pyres. Ganesha, Siva and other gods are there when anybody wants to see them and are best experienced through emotive connects with the idea of God.

For those who experience Hindiusm this way, it is a uniquely different spiritual path that is continuously urging to realize the God within them, including the photographer friend who used his camera parts to create a caricature of Ganesha.

(Rajeev Sunu is an Indian-Australian business consultant and previously vice-president and head of international business at Tata Projects. He can be contacted at rajeev.sunu@gmail.com )