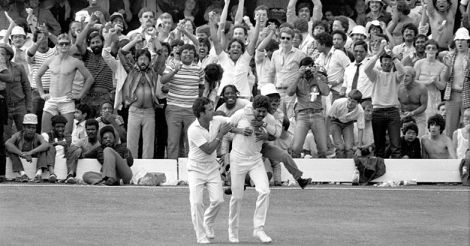 An ecstatic fan jumps on to Kapil Dev after the Indian captain pulled off a stunning catch to cut short Viv Richards' innings in the 1983 World Cup final. Getty Images

There is an old cricketing adage that catches win matches. Though the game is primarily considered as a battle between the bat and the ball where the willow wielders take on those hurling the red cherry, the wicketkeeper and fielders whose job is to take catches and cut off runs play a key role in determining the course of the match. A match is seldom won by a side that drops catches; similarly successful bowlers invariably recognise the efforts put in by the fielders, without whom they would not be half as effective.

However, till the advent of limited overs cricket, standards of fielding remained abysmally low in India. Though there were individuals who were exceptions to this general rule, Indian players were loath to place emphasis on physical fitness and remained “non-benders”. It was only at the turn of the new millennium that a new class of youngsters, led by Yuvraj Singh and Mohammad Kaif, arrived on the horizon and brought about a “fielding revolution”. The advent of foreign coaches and qualified trainers who brought with them a more scientific approach towards physical fitness and agility also contributed to changing the prevailing mindset. Presently, the quality of fielding displayed by sides taking part even in domestic cricket tournaments in the country is comparable with the best in the world.

The importance of fielding in determining not only the course of matches but also in elevating the morale and galvanising the side to higher performance levels is well documented. A study of history of Indian cricket would reveal the role played by certain catches taken at critical moments in bringing about huge changes in the manner in which game is played and followed in the country. Though there are numerous brilliant catches taken by Indian players in international cricket, the following five stand out on account of their impact in influencing the development of the game in the country. I am listing out these catches based on what is perceived to be their significance in the history of the game and not on their relative difficulty.

This is the most written about catch in the history of Indian cricket. Chasing a paltry Indian total of 183 in the 1983 World Cup final, the West Indies were coasting along at 57/2, with Viv Richards in a particularly murderous mood. He had taken Madan Lal to the cleaners during the previous over but the bowler requested his captain to give him one more chance. Kapil relented and Madan ran in and bowled one just short off length. Richards went back and swung into a ferocious pull shot but as the ball was not pitched too short, it struck the top portion of the bat and went up in the air towards deep midwicket where no fielder was stationed. Seeing the ball rise in the air, Kapil, who was fielding at midwicket started running with his back to the pitch. Keeping his eyes firmly on the ball, Kapil ran backwards almost 30 yards and plucked it out of thin air even as it was descending fast. The toothy grin on the face of Indian skipper after taking the catch stands as proof to his belief that India had achieved the breakthrough they needed badly.

West Indies batting collapsed after the fall of Richards, with Clive Lloyd, Larry Gomes and Faoud Bacchus falling in quick succession. A seventh-wicket stand between Jeff Dujon and Malcolm Marshall gave India some tense moments before Mohinder Amarnath ran through the tail to dismiss the reigning champions for 140. This unexpected win electrified the entire nation and led to sudden increase in the popularity of the game. India might win the World Cup many more times in future but nothing would ever match the mixture of excitement and elation, that lovers of the game in the country felt when Kapil held aloft the trophy from the balcony at Lord’s on June 25, 1983.

Solkar pulls off a blinder 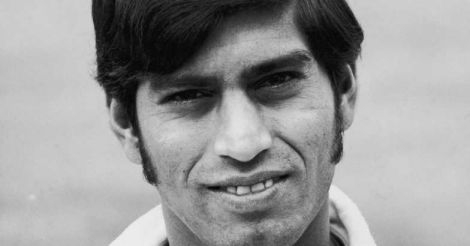 Ekanth Solkar was renowned for his close catching. Getty Images

When India embarked on the tour of England in 1971, history did not favour them, having lost 18 of the 19 Tests they had played in that country. The visitors, under Ajit Wadekar, managed to hold the hosts to draw in the first two Tests, helped to some extent by weather gods. In the final Test at the Oval, when England began their second innings on the afternoon of fourth day with a lead of 71 runs in the first outing, no one gave India a chance. However, a brilliant spell by B S Chandrasekhar, who bowled leg spinners and googlies at a fastish pace, pushed England on the back foot as they lost four wickets with only 49 runs on board. At this juncture Alan Knott, who was in excellent form with the bat, walked into the middle. In the first innings the wicketkeeper-batsman had scored 90 and helped England to recover from 175/6 to 355 and the Indians were naturally wary of him. However, off the fourth ball he faced, Knott played forward to S Venkataraghavan and the ball curled upwards off the face of the bat and dropped to the ground about a few inches in front of the batsman. Eknath Solkar, who was fielding close to the bat at forward short leg, launched into a full-length dive, grabbing the ball millimetres before it hit the turf. Knott was back in pavilion exposing the lower middle order and tail of England.

India bowled out England for 101 and reached the target with four wickets to spare, thus recording their first ever victory in a Test match as well as a series on Old Blighty. Wadekar and his men were feted as heroes on return and this victory gave the nation the confidence that they were capable of besting their opponents on foreign soil.

India had fielded a young and fairly inexperienced side for the inaugural ICC World T20 held in South Africa in 2007. India did not start their Super 8 campaign well, losing to New Zealand. When India met the hosts in the final Super 8 match they needed a win to qualify for the semifinals. After a slow start India managed to reach 153/5 in their allotted 20 overs. This was by no means a formidable target and the hosts certainly had the firepower and experience to reach it. But South Africa got off to a poor start when R P Singh dismissed Herschelle Gibbs in his first over. Two balls later, Singh got Graeme Smith to flash at an out swinger. Dinesh Karthik, the lone fielder in the slips, latched on to it with his body parallel to the ground, to bring off a stunning catch which would have done Jonty Rhodes proud.

South Africa were never in the chase after loss of these early wickets. India ended up with an easy 37-run win which was followed by a 15-run win over Australia in the semifinals. In the finals, India triumphed over Pakistan in a closely-fought match and emerged champions. This victory triggered the start of T20 revolution in the country which in turn led to the commencement of the Indian Premier League in 2008, which set the cash bells tolling. Cricket in India has never been the same and players as well as the Board of Control for Cricket in India (BCCI) have been laughing all the way to the bank. 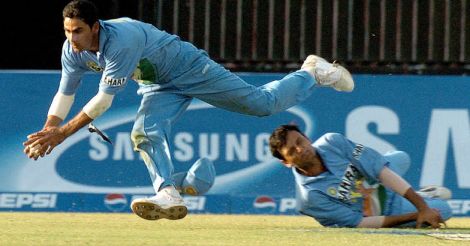 Mohammad Kaif came up with a special effort to send back Shoaib Malik in the Karachi ODI of 2004. AFP

India toured Pakistan after a gap of seven years in 2004. The hurriedly planned tour featured five one-dayers and three Tests. In the first match, India did exceedingly well to put up a total of 349/7 in the allotted 50 overs. Led by a superb 122 by their skipper Inzamam-ul-Haq, Pakistan stayed in the chase till the very end. When eight balls remained, the hosts needed 10 runs, with four wickets standing. At this juncture, Shoaib Malik, who was on strike, hit one from Zaheer Khan in the air in the area between mid on and long on. Hemang Badani ran in from long on fence and, finding the ball dropping short, went into a desperate slide. At this juncture, Mohammad Kaif, who was rushed in from long off dived in front of the sliding Badani and held the ball in his hands. It was a stupendous effort and Pakistan were stopped in their tracks by this catch.

India won the match by five runs. This set the tone for the rest of the tour. India won the ODI series 3-2 and followed it by clinching the Tests 2-1, thus recording their first ever series victory on Pakistan soil. This was a hoodoo that India required to break before being acknowledged as a top side in international cricket. The euphoria caused by the win in the first match brought in record number of spectators before the television sets and this led to sudden spike in advertising revenue. The BCCI got a windfall when bids were invited for live telecast of matches from next season onwards.

When an inexperienced Indian side under Ajit Wadekar landed in the West Indies in 1971, they were expected to be easy fodder for the hosts led by Gary Sobers. However, the visitors showed their mettle in the very first Test where they enforced follow on. In the second Test at Port of Spain, India secured a 138-run lead in first innings and were pushing for wickets in the second when Salim Durani was brought on to bowl. Durani struck a big blow by castling Sobers. Seeing Clive Lloyd scoop the balls spinning into him uppishly to the area around midwicket, Wadekar moved from his usual position at slip and positioned himself there. The next time Lloyd pushed at Durani, Wadekar was prepared to pick up the uppish shot inches before it hit the ground.

The West Indian batting collapsed after this with Venkataraghavan running through the tail and the Indian batsmen knocked off the target of 124, losing only three wickets. This was the first time that an Indian side had triumphed in a Test in the Caribbean islands and Wadekar and his side hung on to this lead to win the series as well. The catch taken by the skipper was the turning point of the match and the series. This win gave the side the confidence to take on England successfully in their own den later that year.

The instances recounted above are significant not only for the quality of catches but for their lasting impact on the game and its growth in the country. Since Indian players have realised the importance of top quality fielding as well as physical fitness during recent years, one can be hopeful that the success which the national side is enjoying presently would continue in the future years as well.

Amitabh Bachchan, Abhishek responding well to treatment, will be in hospital for at least 7 days

Amitabh Bachchan and his son, actor Abhishek Bachchan, who were admitted to a hospital after testing positive for Covid-19.