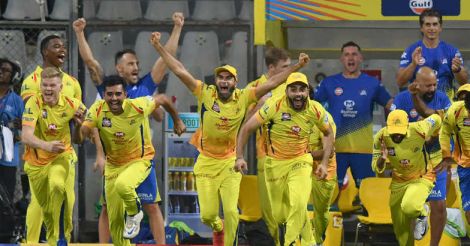 Chennai Super Kings players rush on to the field to celebrate their title triumph. AFP

The 11th edition of the Indian Premier League (IPL) that concluded last week was a worthy successor to the previous versions, both in terms of entertainment and edge-of-the-seat excitement provided to the spectators. The IPL has been in many ways a game changer so far as Indian cricket is concerned. Though the most obvious and direct impact of the IPL has been on the finances - both of the Board of Control for Cricket in India and the players who take part in the championship - the other positive effects are equally significant.

The Indian players have gained in confidence and become more combative and assertive since the advent of IPL. The newer generation Indian cricketers has benefitted from playing along with the best of contemporary players and sharing dressing rooms and practicing with them. The quality of fielding too has shown a quantum leap and Indians are no longer considered as sloppy and sluggish on the field.

However, the real strength of a tournament like IPL is that it provides an excellent platform for players from across the country as well as from abroad to showcase their talent. Hence, the gains of this championship should be gauged in terms of outstanding performances of individual cricketers and the new players “discovered” during the tournament.

IPL-11 had its own set of brilliant performers, who set the stage alight and proved to be match-winners for their sides, besides providing top class entertainment to the those who followed the matches. Here is a look at the players who dazzled during IPL-11.

With the wisdom of hindsight, one can say that this was an IPL where wicketkeepers stole the show. When one talks about top ranking stumpers in limited overs cricket, the list has to begin with Mahendra Singh Dhoni, who was in sublime form during during the championship. This was his most prolific season with the bat, demonstrating to the whole world that he still retained most of the skills that made him the most successful finisher in limited overs cricket. He silenced his detractors who had started questioning his abilities at the close of innings by scoring almost 70 per cent of his runs in the end overs. It was evident that he had lent considerable thought to his game as the number of dot balls faced by him, which used to be very high during the initial part of the innings, came down substantially. Further, Dhoni also showed that his capacity for confounding opponents has not come down even a bit.

In a move that reminded one of Joginder Sharma bowling the last over in ICC World T20 final in 2007, Dhoni promoted Harbhajan Singh and Deepak Chahar in the league match against Kings XI Punjab and seized the initiative on the back of their pinch-hitting abilities. Similar was his decision to stick with Faf du Plessis in the first qualifier despite the South African being in poor form with the bat. His decision to retain faith in the experienced Shane Watson in the final paid ample dividends as the Aussie veteran proved his worth by scoring a spectacular unbeaten century to take his side to victory. The sharply ticking cricketing brain, increase in strike rate, decrease in number of dot balls and regaining his powers in the final overs of the innings together contributed to making Dhoni one of the most valuable players in IPL-11. The good news that emerges for Indian cricket is that he has not shown any signs of age nor given any indication that his love and passion for the game has come down by even the tiniest bit.

Following Dhoni closely is Dinesh Karthik, who has been condemned to live in the shadow of the former despite possessing excellent cricketing skills. Batting in the middle order, Karthik often came out when the end overs were in sight and one was required to press down the pedal immediately. His strike rate of the first five deliveries stood at a humongous 260, which indicates the speed with which he hit the ground running. His guiding hand stood Kolkata Knight Riders in good stead during the closing stages of innings, particularly when they were chasing a difficult target. Karthik also showed that he possessed a sharp cricketing brain by marshalling the resources at his disposal astutely and leading his side into the play-offs.

Rishabh Pant, who was named by Viv Richards as the new power hitter of the game, was another player who impressed with his exploits with the bat. He was adjudged as the “emerging player” of IPL -11 for his performances which saw him score 684 runs in 14 matches. The fact that his side, Delhi Daredevils, finished at the bottom of the heap despite his astounding performances with the bat would remain one of the mysteries of IPL-11. 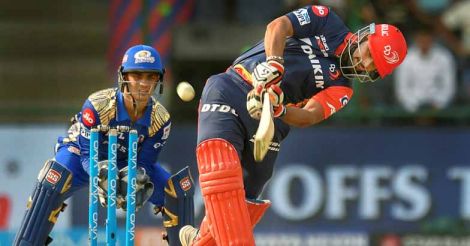 A leading cricket website had found that out of the 68 balls Pant faced in the death overs, he hit 15 for fours and another 15 for sixes! This would make him the favourite for succeeding Dhoni in the national side in the limited overs version of game, based on current form.

Sanju Samson started the tournament with a series of big scores but failed to maintain the momentum during the later phases. However, his good form and calm presence at the top of the order were factors that helped Rajasthan Royals to qualify for the play-offs. Sanju could use the stage provided by IPL to announce to the followers of game that he is ready for the tougher tests of international cricket.

On the bowling side, the champion performer was Rashid Khan, the leg spinner from Afghanistan, who is maturing into one of the best in the business despite hailing from a country where very little cricket is played. He had finished as the sixth highest-wicket taker in 2017 in his debut IPL season. It was this performance that fetched him an auction price of Rs 9 crore in IPL-11 and he justified the trust placed on him by Sunrisers Hyderabad by returning 21 wickets at an economy rate of 6.73. 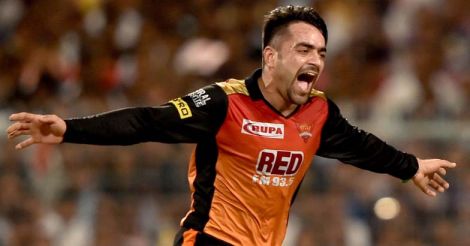 Rashid Khan bamboozled the best of batsmen in IPL 2018. PTI

In the first qualifier against Chennai Super Kings (CSK), he bowled a memorable spell conceding only 11 runs off four overs while picking up two wickets, including that of Dhoni, who was defending stoutly. The fact that he could shackle and finally dismiss an accomplished player of top quality spin bowling as the former India captain shows the strides that this 19-year-old has made since he first stepped on to a cricket field outside his home country 18 months ago. Rashid's googly, which he bowls at a much quicker pace than his compatriots and the leg break, which he can deliver using a back of the hand action, make him one of the most dangerous purveyors of the craft in contemporary cricket. His bowling lent an extra edge to his side and it was interesting to observe that in the final, CSK smartly played out his quota of overs.

It was the respect that he commanded from batsmen throughout the championship that prompted Sachin Tendulkar, who is not given to hyperbole, to state that Rashid is the best bowler in the world today in T20 cricket. Cricket lovers would be eagerly awaiting his Test debut in his country’s maiden Test against India later this month, to see how he would adjust to the demands of the longer version of the game.

A surprise gain from IPL-11 was debutant Nepalese leg spinner Sandeep Lamichhane who donned the colours of Delhi Daredevils. The 17-year-old, who became the first cricketer from Nepal to play in the IPL has had a training stint under former Australian skipper Michael Clarke. He showed no sings of nerves in the crucial match against Mumbai Indians and went on to pick up three wickets for 36 runs. If this season’s performance is any indication, Lamichhane has the potential to develop into a top quality spin bowler.

As can be seen the list is a mixed lot, including both seasoned campaigners and rookies. While Dhoni and Karthik are at the fag end of their career and may have only couple of seasons more of cricket left in them, others would be looking forward to a long innings at the highest level. It would be interesting to watch the progress of these cricketers and see where they stand five years from now. The challenges would vary from one player to another as someone like Rashid would have to carry the burden of expectations of entire Afghanistan on his shoulders every time he steps on to the field. Similarly, for Lamichhane, once the initial curiosity fades away he would be exposed to the harsh realities of hailing from a virtual cricketing backwater, requiring him to not only to perform well but also act as a motivational force for others young Nepalese players. Pant and Sanju would need to brace for the demands of international cricket and keep upgrading their game on a near continuous basis.

The IPL can justifiably claim to have become the “Cannes of Cricket”, the place where players, administrators and everyone connected with the game, past and present, are required to make their presence felt, in the midst of pomp and glamour. Like the traditional film festival held in the resort town in French Riviera, the IPL has also grown into a venue where fresh talent first gets showcased. It is this potential for attracting talent from all parts of the world that gives the IPL a special place in the hearts of cricket lovers. And this championship would continue to retain its significance so long as it remains as the premier venue for discovering and nurturing new talent.