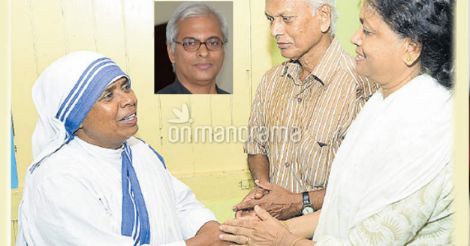 Sister Sally meets family members of Father Tom Uzhunnalil (inset), the priest who was abducted from an old-age home in strife-torn Yemen. Manorama

Ramapuram: When Sister Sally called on the family members of Father Tom Uzhunnalil, the Salesian priest who was abducted from an old-age home in strife-torn Yemen about three months ago, it provided a beacon of hope to his grief-ridden relatives.

Sr Sally had a narrow escape as she was present at the old-age home when the armed group attacked the building and killed many people before taking Fr Tom away.

When she arrived at his ancestral home at Ramapuram on Saturday, Fr. Tom’s brother Mathew and wife Reetha could not control their emotions. Mathew stood expressionless and stared at her for some moments when he first saw her. Then he kissed her hand and stood there quietly praying. Reetha told Sr Sally that they could feel the presence of Fr Tom when she entered the home.

The fear on Sr Sally’s face was visible when she narrated the tale of violence on the night of March 4 when the terrorists stormed the old-age home run by the Missionaries of Charity.

“They barged into the premises when the gate was opened for visitors. They entered the building after killing two security officers. At the time, Fr Tom was praying in the chapel,” she said.

“When I saw the armed men inside the building, I tried to phone Fr Tom, but before I could dial the number, they entered the room. Though I was panicked I managed to hide behind the door of the storeroom. I saw two persons collapsing on the floor at a distance of just about 10 feet. Blood was oozing out of their heads. I was in a state of shock. The attackers sprayed bullets at will using guns fitted with a silencer. They entered my room thrice after repeatedly asking the inmates about the number of people living in the old-age home. However, they could not find me.”

“They threw grenades into the next room to force me to come out of the hiding place. My prayer was that even if I get killed in building collapse, I should not let myself to be killed at the hands of terrorists. When I came out of the room after about two hours, it was just blood everywhere. A boy who was a relative of one of the inmates told me that he saw terrorists taking Fr Tow away. He was blindfolded, and his hands tied behind his back, the boy, who was the only witness to Fr. Tom’s abduction, said.

“When he saw the terrorists, the first thing Fr Tom did was to consume the Holy Communion kept at the ciborium to prevent attackers from spoiling it. Though the residents and staffers, most of them hailing from Eden, pleaded with them not to harm priests and nuns, they did not pay heed to their requests and shot all of them down one by one. All victims had gunshot wounds on the right side of their forehead,” Sr Sally said, describing scenes of blood and horror in the aftermath of the attack.

When Mathew and Reetha showed a photograph of Fr Tom to her, Sr Sally remembered that it was taken on March 3, the day before the dreaded attack. It was the same photo which was given to security officials and the media following his abduction.

Sr Sally said she will join the Regional House of the Missionaries of Charity in Jordan on June 7.

“Before I come here next time, Fr Tom will be back safely,” she said and prayed before leaving.

She was accompanied by Joseph Kuruvila and Sr Claire rose and Sr Bindu of Missionaries of Charity, Kottayam.