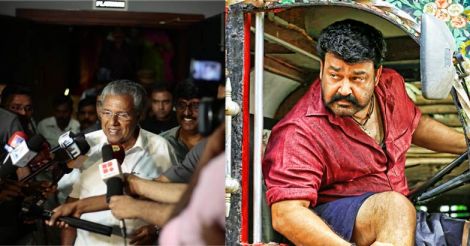 Mollywood blockbuster Pulimurugan, it seems, is gradually inching into the state's political discourse.

Or so it seems.

The latest in a string of our political masters to be bitten by Pulimurugan, the character played by Mollywood superstar Mohanlal in the movie of the same name, is none other than CPM state secretary Kodiyeri Balakrishnan.

Being the state secretary of the party that rules the state, Kodiyeri is not hesitant to flaunt political machismo. And it is only natural that Kodiyeri resorts to analogies laced with the plot of 'Pulimurugan'.

For starters, Pulimurugan, the protagonist played with elan by Mohanlal, is an artful dodger who has mastered skills to tame wild tigers which enter human settlements of Puliyur. That his skills were developed out of a necessity to seek vengeance on a wild tiger that ripped apart his kin is another story.

So our comrade, who is crisscrossing the state without much workload being in the ruling rather than opposition front, this time took cudgels for his fellow countrymen, who were being attacked by wild animals.

Kodiyeri's contention was that forest department officials were probably hand-in-glove with wild cats that stray into human habitats.

Otherwise, why aren't they taking steps to protect human beings from attacks by wild animals, the CPM state boss said while speaking at a function at Marayoor in Idukki.

Perhaps, there was no way Kodiyeri could have chosen the bordering district of Ernakulam to unleash such innuendos against forest officials

'Pulimurugan' was shot at Peendimedu near Pooyamkutty in Ernakulam district.

But our comrade had no qualms in accepting that "forest, wild animals and people" are part of our eco-system.

But he was peeved at the way officials of the forest department were looking the other way when wild animals wreaked havoc on human settlements.

This is where, in Kodiyeri's scheme of things, 'Pulimurugans' come into play.

Kodiyeri had no hesitation in proclaiming that in such a scenario, in which forest officials look the other way when human habitats are shattered by pug marks, it was only natural that Pulimurugans emerge out of no where.

Regardless of the noble intentions of Kodiyeri, forest officials have not taken kindly to his Pulimurugan analogy.

Kodiyeri should have known that forest officials work under immense pressure, they think.

And they are seething in anger at the comments made by the top boss of the ruling party in the state, although they have restricted their ire to WhatsApp group conversations, according to news reports.

Now, will they seek the good offices of Pinarayi Vijayan, who himself has been anointed as a political 'Pulimurugan' by many recently, to rein in his party colleague?

Pinarayi's affection for 'Pulimurugan' came into public domain when he embarked on an unprecedented visit to a swanky multiplex in the state capital to watch the stunning heroics of Murugan on a 4K screen.

Congress leader K.C.Abu was the one who foresaw this foray by 'Pulimurugan' into our political terrain a month back.

“If Pinarayi is Pulimurugan, then Oommen Chandy is 'Thoppil Joppan,” he had thundered two days after 'Pulimurugan' and the Mammotty starrer hit the screens last month.

It remains to be seen, if Oommen Chandy will take a cue and jump into cinematic analogues, but one thing is certain – 'Pulimurgan' has entered our political habitat. And the wild hunter is here to stay.