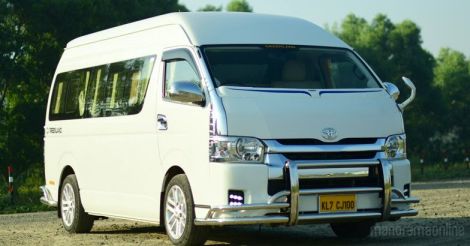 In many Asian countries other than India, Toyota HiAce, known as the common man’s vehicle, is one of the most sought after vans.

In terms of performance and utility, it can be compared to Matador van. HiAce is versatile as it is capable of donning varied roles. This light commercial van can be used as a mini bus, pick-up, ambulance, taxi etc.

Though the Indian market appears to hold huge potential for HiAce, Toyota has not considered introducing the vehicle here. It seems the automaker has no plans to roll out HiAce in India in the near future.

HiAce, which is a common sight on roads in Japan, China and African countries, was brought to Kerala by the Kochi-based Greenland Travels.

Greenland, one of the leading travel operators in South India, has spent a huge amount of money to customize the vehicle to suit specific requirements before introducing it here. Though a number of customized HiAce vehicles have been brought to the state over the years, this one outdoes all others in terms of performance and luxury.

First launched in Japan in 1967 as an eight-seater van, HiAce has since grown in popularity. The second generation HiAce hit the market in 1977, followed by third, fourth and fifth generations in 1982, 1989 and 2004. Though the first generation HiAce was available in Europe and America, Toyota chose not to roll out the fifth generation line-up in these markets.

Before launching in Kerala, this HiAce model was taken to Thailand to incorporate certain super-luxury features into the vehicle. By spending about Rs 1.02 crore, the 16-seater variant (including the driver seat) was converted into a nine-seater. Also the driver and the passenger compartments were separated with a partition as found in limousines. The glass window in the driver’s cabin is detachable. 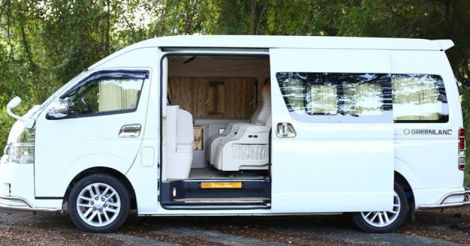 The automatic sliding doors open to lavishly luxurious interiors. There are four comfy push-back seats in the second row. The seats in the third row can be folded flat on one side of the vehicle to enhance leg room.

The four seats can be individually and precisely adjusted for any reasonable leg room. The comfort seats are also available with three different massage functions. The other key features include a top-quality music system, LCD TV, cup holders etc. 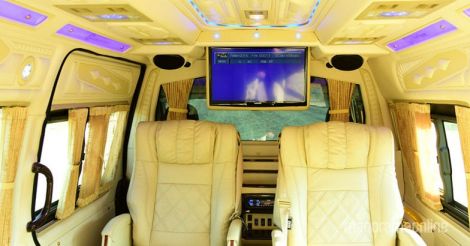 HiAce is designed to provide maximum comfort to the passengers without compromising the vehicle’s aesthetic value. The elegantly designed lights and the roof wear a majestic and dashing look. Suspension settings has been tweaked to improve the drivability.

As the design lays emphasis on comfort of passengers, the lights and automatic doors can be adjusted or controlled by the occupants.

Underneath is the 3L engine found in Toyota Fortuner. The massive 2982cc 4-cylinder in-line DOHC engine produces 100kw power at 3400 rpm and 300 Nm torque at 1200 rpm. It comes mated to a 4-speed automatic gearbox.

Since the engine is available in India, authorized Toyota dealers service centers can be approached for any service or repair.