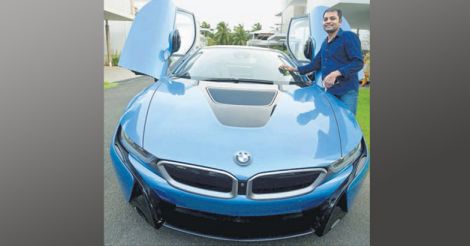 Sakeer Hussain, a Thrissur-based young entrepreneur with a passion for exotic cars, became a proud owner of the sleek BMW i8.

Thrissur: BMW i8, the latest offering from German carmaker BMW is such a luxury icon that every car lover would like to have. The new generation sports coupe, which has been stealing the spotlight at various auto shows across the world, is now set to blaze the Kerala roads.

A few days ago, Sakeer Hussain, a Thrissur-based young entrepreneur with a passion for exotic cars, became a proud owner of the sleek BMW i8.

The petrol-electric hybrid i8, the flagship of BMW's burgeoning eco-friendly i sub-brand, caught the attention of car enthusiasts from across the world two years ago. As an all-electric car, it generates zero emissions and, as expected, environmentalists have given it the green thumbs-up.

As soon as the company rolled out this model in India this year, Sakeer, managing director of property developer Rahna Homes and Developers Pvt Ltd, purchased the vehicle and became the first owner of the i8 in South India.

Among those who have booked the model and are waiting for delivery there are Mollywood stars and many prominent industrialists from the State.

Renowned car experts believe that car enthusiasts would fall in love at first sight with i8 because of its incredible and stunning looks. The model has impressed many of the top national and international award committees with its innovative designs.

The i8 can operate on electricity alone for up to 35 kilometers for every 45 minutes or more of charging. The battery pack is mounted beneath the floor while the three-cylinder engine is located behind the seats.

The production version of the i8 was unveiled at the 2013 Frankfurt Motor Show. The company has so far sold around 7,300 across the world.

Spectacular butterfly doors, tastefully designed laser headlights, state-of-the-art infotainment system, cockpit inspired by Jaguar aircraft, are some of the major features of the i8. The power-packed engine reaches 0-100 km/h in just about 4.4 seconds.

The car costs about Rs 3 crore on road, but what's on offer is definitely worth every penny of its asking price because i8 is not just another sedan, it is, in fact, a dream car!