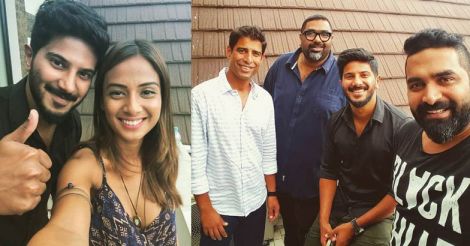 Fan were quite surprised to see Dulquer Salmaan's thumbs up picture with his Neelakasham Pachakadal Chuvanna Bhoomi co-star, Paloma Monnappa few weeks back. And in no time, reports surfaced that the duo will be next seen in Amal Neerad's untitled movie.

But contrary to all reports, the model-actress was hosting a show 'India My way' for Discovery Channel and is on an all-India tour for its shooting. She is said to have covered few shooting scenes of the Amal Neerad movie for the upcoming episode of the travel show, following which the actress clicked a selfie with Dulquer. Paloma also said to have visited Gopi Sunder's studio.

Reportedly, the video will be telecast by September. A short promo video of the show has already been released.

Model Paloma Monnappa made her acting debut in Malayalam opposite young star Dulquer Salmaan in the critically-acclaimed Neelakasham Pachakadal Chuvanna Bhoomi in 2013.