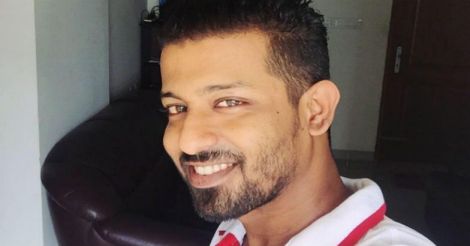 He was the last to join the Happy Wedding team, and went on to become one of the mainstays of the project.

Meet T. K. Vimal, who penned the songs, sang and scored the background music of the movie. In a freewheeling interview he shares his experience gathered from his musical journey.

Editor Dileep had earlier listened to some of my experimental tracks, and he invited to do the background score. When I joined the team, they had already completed the shoot, set the songs and prepared the visuals for the song sequences. I felt there was scope for more songs, and included four more. That’s how I scored the music for those songs. Arun Muraleedharan did the music for the other songs.

The four newly included songs were rendered from the hero’s perspective and we felt the same voice would be appropriate for them. It led to me singing them. Penning them, too, was accidental. I wrote the one for the climax scene. In fact it was a team effort, with friends joining in with lyrics. I combined them and gave music.

Both my parents were artistically inclined. My father used to play the violin, while mother was interested in dance. They, however, neither took their talents seriously, nor took them as means of livelihood. I started learning tabla from the age of five. It instilled in me a sense of rhythm. I also learnt piano for four years. Later I learnt from the Internet. The turning point in my life was the Masters Degree in Music Production, which I pursued in the UK.

I have earlier scored the music for movies such as Kunthapura and Rasputin. While I did the background for Rasputin, I was the music director of Kunthapura, an Indo-UK venture. I got Kunthapura while I was a student in the UK. I had earlier met its director Joe Eshwar at a film fest, and it was based on this acquaintance that he roped me in. I have composed several tracks before and after Kunthapura, but none of them were released. I am happy that several people are congratulating me for my work in Happy Wedding.

Omar, the director of Happy Wedding, is a newcomer. He gave me complete freedom, and he accepted the tunes he liked. The editor and director together decided the music. But then, there was a slight constraint since I had already seen the visuals before scoring the music. But as a lyricist, it helped me.

God willing, I will continue in movies. It need not necessarily be related to music. I also wish to direct a movie, and its work is currently on. I have committed several mistakes earlier, but I will henceforth be careful.