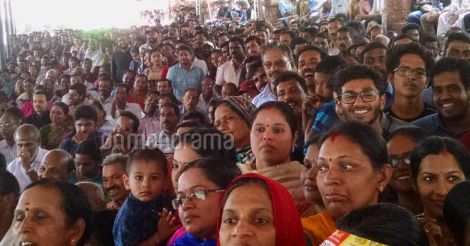 Picture this. A student from an economically backward family, who is exceptionally good at Bharathanatyam, taking part in the Kerala State School Arts Festival. It sounds good and innocuous but under the veneer of art lies a dark underbelly of unhealthy competition, money power and snobbery.

Let us start from the start. The inaugural function in itself was a dichotomy of sorts. Chief minster Pinarayi Vijayan chose to be vitriolic in his criticism of Fascist forces 'seeking backdoor entry.' In the next instant, we see an epitome of humility, K.S. Chitra, rendering a song which won her a prize in the youth festival many decades ago. She offered it as a prayer to all the participating students, going on to say that the festival should be a platform for healthy competition. But, the youth festival's spirit is seldom stirred by humility and mutual appreciation.

Sources say children from well-to-do families have a definite advantage of good costumes. For dance events, quality attire can easily sway the judges, they say.

The quality of judgment is in itself another issue which needs serious evaluation and correction. If the number of appeals is anything to go by, judgment is weak. But, behavioral psychologists say it is the 'intolerance' of a society that is reflective in such actions.

Behavioral psychologist Robin Mathew says, "The behavior of parents and the pressure they exert on students is what transform into action. Unfortunately, the approach is not child centric but it is essentially an ego-trip for the parents."

This is probably the first time when the Vigilance and Anti-Corrpution Bureau (VACB) are on the stake out to see if there is any bribing. The VACB had raided festival venues ahead of the event after a news channel aired video clips of a middleman quoting a price for first and second prizes in various events.

There is a definite lack of tolerance, Dr. Mathew says. This is systemic. "Our system has not ingrained the Western goodness of taking children seriously and explaining things to them. Queries from children are brushed aside with scornful taunt," he says.

A point to note among the voices of dissent is that the festival has not adapted to the newer world order where free-wheeling thought and action are rated above rote learning and textbook competition. The event still retains the archaic elements of bench-marking which in itself is deemed retrograde.

Before psychologists and educationists are called in to deliberate on the ways and means to change the mold of the festival or do away with it, many questions should start gnawing at the collective psyche of the State.

Probably, an understanding that a holistic progress and sensible advancement is beyond a parochial jamboree could help. The innumerable complaints about the judgments stem from the fact that the winners get grace marks at school level. And some parents put immense pressure on kids to outperform their peers just to massage their inflated egos.

Serious thought should go into how this infrastructure of snobbery can be dismantled. Then only you can infuse life into a jamboree which is meant to showcase young talent.