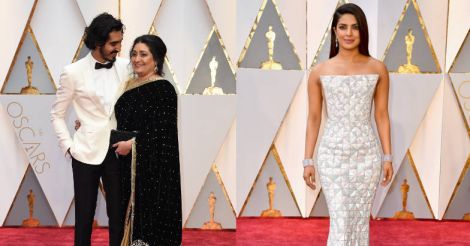 Hollywood's brightest stars flaunted gold and silver gowns on the Oscar red carpet, doused with a generous helping of diamonds, feathers, sequins and symbolic blue ribbons on the world's most cinematic runway.

Check out what the stars and celebrities chose to wear on the special night.

Emma Stone, who has been nominated for best actress in "La La Land" sparkled in a 1920s inspired gold fringed Givenchy gown.

Singer-songwriter Pharrell Williams, decked out in a fitted Chanel tux accessorized with a dramatic black bead necklace that fell down over the lapel.

Two stuffed pandas, meanwhile were the arm candy of Jackie Chan, stand-ins for the real pandas the action star adopted at a breeding facility in Chengdu, China.

"I am the panda ambassador! They go wherever I go, they take photos with famous people, Stallone, Clinton...," Chan said.