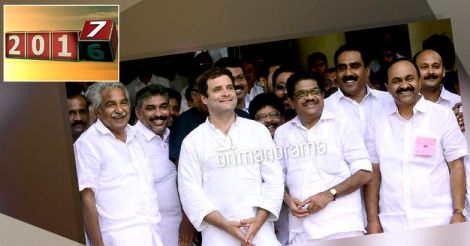 The Congress-led United Democratic Front is showing classic signs of inertia that can only accentuate its political downfall. After the battering it received at the hustings, thanks to the countless scams it got embroiled in and the previous government's utter disregard for political decency, the Congress never did any serious introspection.

The schism in the state unit of the Congress, a permanent fixture the party had to live with, continues to batter its already dwindling fortunes. The 'A' and the 'I' groups have to now share the spoils, which has a tacit approval of KPCC president V.M. Sudheeran.

At least, that is what former chief minister Oommen Chandy, who is the indisputable leader of the so-called 'A' faction, believes. And the 'A' faction made known its displeasure despite the Congress High Command's stand that factional representation system in the state unit of the party has to end.

The fact is that this cannot happen. Over the last few decades, the Congress has always identified itself as the merged entity of the 'A' and 'I' groups – spearheaded by none other than K. Karunakaran and A.K. Antony in earlier days. But even after Karunakaran's demise and Antony's elevation to the national leadership structure, the factions thrived in the Congress.

The Congress national leadership did not do much to rein in the monster of factionalism, but instead dangled carrots to placate the warring factions on and off. Perhaps, that approach is now reaching a flash point as the party, which lost the polls, is struggling to stay afloat in the state where the BJP is gradually making giant inroads. And the worrying fact is that these inroads have been made mostly at the cost of the grand old party.

So what should the Congress do in such a situation? It should carefully analyze the reasons for such setbacks, chalk out an action plan to revive its political fortunes and implement it in the right earnest. Unfortunately, that is not the case.

Consider this: when UDF leaders from Kerala, led by the state's leader of the opposition Ramesh Chennithala, staged a protest at Jantar Mantar in New Delhi against the demonetization, Chandy and Sudheeran were conspicuous by their absence.

The reason being the strain in ties between Chandy and Sudheeran over sharing the posts of DCC presidents, which were announced recently. There is no unity in the UDF's main coalition partner.

Now that new DCC presidents have been announced, the intentions of the central leadership are clear – old warhorses will not be enjoying the same privileges anymore. Chandy and Chennithala-headed 'I' faction had earlier torpedoed Sudheeran's efforts to revamp the KPCC.

Now, the KPCC president has just won another round in the never ending cat and mouse game of factions that is now seriously undermining the credibility of the party.
The new list of DCC presidents amply proves the waning supremacy of Congress A faction. The 'I' group has seven of its leaders in the list and the 'A' faction had to be contended with the control of four DCCs.

That any action by the AICC vis-à-vis its Kerala unit needs the backing of Congress Working Committee member Antony is well known in the Congress circles in the state. If that is the case, Antony seems to be veering towards the idea that the rampant factionalism, which tears apart the Congress in the state, has to end somehow. Antony would know well that it cannot be implemented overnight.

This culture can only be dismantled gradually. This is precisely what the Congress High Command is trying to enforce, but that has irked the Chandy-led 'A' group, ironically named after Antony himself.

After the DCC presidents were announced, the miffed 'A' group did not hesitate to vent its anger. It sent its emissaries, including senior leader M.M. Hassan, to present its 'grievances' to the Congress High Command.

The 'A' group just got a patient hearing but no assurances came forth about 'addressing' its grievances.

The interpretation is that the High Command is not so pleased with the constant squabbling for positions in the state unit even after it received an electoral drubbing.
Moreover, the Chandy-led faction was almost given a free hand on fielding some tainted candidates during the previous polls despite the public opposition by KPCC president, who could just strike out one Chandy aide from the Congress candidate list while the rest survived the scare.

The KPCC chief had then made his displeasure known to the top brass and the subsequent poll drubbing only strengthened his stance. Sudheeran has been able to somehow invoke this reality to the AICC leadership. And he is being heard in the Congress' corridors of power, which is somehow triggering the frustration of the 'A' group and Chandy.

A section of leaders in the Congress always felt that the adamant altruist in KPCC chief was the chief detractor of the party.

The party was vertically split between the virtuosity espoused by Sudheeran and the practical line advocated on the sly by the 'A' and 'I' groups on a host of issues, including the controversial liquor policy, bar bribery issue and candidate selection.

The unbridled support that Sudheeran gains from the Congress leadership, especially at a time when Rahul Gandhi is gradually taking over the reigns from Sonia, is more of a threat to the 'A' faction than 'I'.

The Chandy-led faction has lesser number of lawmakers in the Congress legislature party and it cannot afford to lose its strings in the party apparatus. The 'A' faction does not see Chennithala as a potential leader who could emerge in stature both within the party and the Legislature.

Sudheeran on his part has so far confined himself to the party, though he took some stern stands on government policies during the UDF tenure. The High Command's options to chalk out a revival in the state is relatively limited in the current scenario, unless Chandy himself is 'accommodated'.

But with the party out of power at the Center, and Chandy himself reluctant to take up national-level responsibilities, there are only a few options left before the High Command. It will have to seek the services of Antony himself to broker peace between Chandy and Sudheeran. Perhaps such a formula could be adopted in which Sudheeran himself may relinquish the KPCC president's post. AICC can invoke the theory of the need for a young leadership to bring about this change, albeit in the distant future.

There are many faces, including KPCC vice president V.D. Satheesan and former KPCC chief K. Muraleedharan, who can take over from Sudheeran. But for this formula to be accepted, Antony would have to move heaven and earth to convince the 'A' faction. If you kick Chandy upstairs, it is as good an action as dismantling the 'A' faction and therein lies its grouse. These scenarios may not workout, given the Congress' penchant for procrastination.

But the grand old party needs to do some serious introspection on these lines if it has to revive itself in the state's political domain. Such a “surgical strike” may not happen as long as Sonia is at the helm, but it is now increasingly clear that the Congress would have a younger leadership structure, which may not accommodate the whims and fancies of the old guard at the state-level.