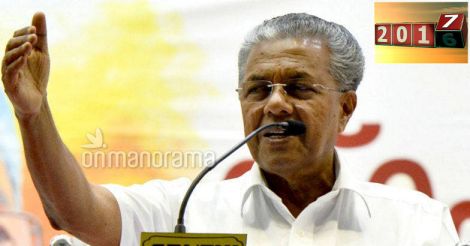 Pinarayi Vijayan has became the beacon light of the party as well as the government.

Perhaps this has been the year that Pinarayi Vijayan, 71, finally got his act together on many counts.

After nearly a decade-and-a-half at the helm of the Communist Party of India (Marxist) in Kerala, the CPM leader finally etched himself as the chief minister of the state.

The landslide win of the Left Democratic Front was almost a foregone conclusion, but Pinarayi's ascension to the top post in the government was never a clear cut case, though party insiders would want you to believe that theory.

Contours of a 'deal'

There was only one hurdle which Pinarayi had to climb to grab the coveted post, but that was a formidable one – V.S. Achuthanandan.

Throughout the poll campaign, VS was the star campaigner crisscrossing the state, giving credence to the talk that the veteran Marxist would get another shot at the CM's chair, albeit for a brief term.

VS, the rebel within the CPM, had already fallen in line with the diktats of the party, and that had triggered talk of a 'deal' to accommodate the popular leader.

The contours of the so-called 'deal' were never in public domain, but it was clear that the CPM had settled its internal issues amicably.

In an apparent show of solidarity, VS campaigned in Dharmadam, Pinaray's constituency and the latter returned the favor by turning up in Malampuzha.

Riding on a wave of anti-incumbency against a government widely perceived as corrupt to the core, the LDF got a thumping mandate with both Pinarayi and VS reaching the assembly posting huge victory margins.

Contrary to popular expectations, Pinarayi was anointed as CM by CPM general secretary Sitaram Yechury in presence of VS himself. The CPM boss then christened VS the “Fidel Castro of Kerala” divesting him of any further claim to the top post and at the same time giving him an honorable exit.

Thus, Pinarayi became the beacon light of the party as well as the government. The party apparatus in Kerala was firmly behind him – result of the firm grip he had over the organization in the nearly one-and-a-half decades he held sway as party secretary.

There were no murmurs of dissent on ministry formation like during the previous LDF government headed by VS, when the veteran was denied the home and vigilance portfolio, apparently at the behest of the official party faction led by none other than Pinarayi.

The six-month-old Pinarayi government has so far passed muster on most fronts, though it had to face nepotism charges by the CM's close aide E.P. Jayarajan, who was then forced to quit as minister.

Pinarayi did not back Jayarajan as was widely expected sending out a message that his government intends to retain its clean image at any cost. That this irked Jayarajan is not at all a secret, but for now there is no one in the party or government who can dare to question Pinarayi.

Uneasy lies the road ahead

This is the greatest advantage the CM enjoys. And this could also be his biggest drawback if the trajectory of the political play unfurling in the state does not roll out as expected.

Pinarayi, the deft politician, has a not so enviable task at hand on the political front. Ironically, that is mainly due to the gradual emergence of the NDA as a third grouping which coincides with the gradual dip in fortunes of the Congress-led UDF, which is still grappling with its internal bickerings.

There is no sign that the Congress would reinvent itself to form at least a credible opposition in the state.

Therein lies the danger that Pinarayi would like to avert at any cost – the danger of the BJP-led NDA occupying the main oppositions space in the state's political horizon, replacing the Cong-led UDF.

Till the last elections, such a scenario would have been dismissed as wishful thinking by the CPM. But, not anymore. The state has elected its first BJP legislator and the saffron party came a close second in eight constituencies.

How Pinarayi deals with this uneasy situation would determine the state's political narrative in the years to come.