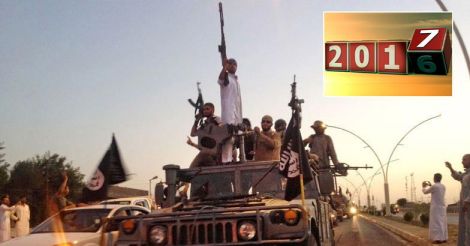 As we bid farewell to year 2016, here is a look at some of the heinous terror attacks around the world.

At least 72 people were killed in a suicide blast at one of the largest parks in Lahore. Tehreek-i-Taliban Pakistan Jamaatul Ahrar claimed responsibility for the attack.

At least 250 women were executed by Islamic State fighters for refusing to become sex slaves.

Nearly 150 were killed and around 200 injured in a bombing at Syria's Mediterranean coast. Islamic State claimed responsibility for the attack.

292 people were killed in a bomb explosion at a shopping complex in the Shia Muslim dominated Karrada disrict. It was one of the deadliest attack by Islamic State.

A Tunisian man drove into a crowd celebrating Bastille Day with a cargo truck killing 86 people, including 10 children.

A suicide bomb attack claimed the lives of at least 70 people at a hospital in Quetta in south-west Pakistan. Reportedly, a faction of the Pakistani Taliban was behind the attack.