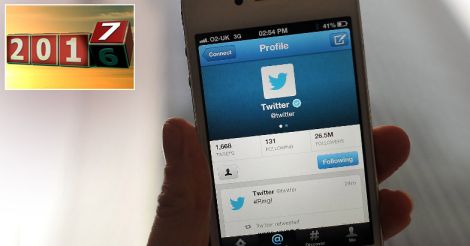 The year 2016 witnessed a number of spectacular events, like the very unexpected triumph of Donald Trump in the US presidential elections and Britain's exit from the European Union. Yet, the most popular tweet of the year has just one word - 'limonada' or 'lemonade'!

A Spanish gamer called 'elrubius' scribbled down this one word on his Tweet wall on 20th of August. The tweet went viral and got retweeted more than a million times. It marked a record of 1.3 million retweets after the gamer promised prizes for each retweet.

Second most popular tweet of the year belongs to Harry Styles, singer-performer from team 'One direction'. He quoted a lyric by ex-girlfriend Taylor Swift on his birthday. "I don't know about you, but I'm feeling 22" and it turned viral on Twitter. Harry gained 7 lakh retweets for the remark.

The next popular tweet came from Democratic Party leader and US presidential candidate Hillary Clinton herself. Well, Hillary never forgot to turn a newsmaker on social media sphere during her campaign. "To all the little girls watching...never doubt that you are valuable and powerful & deserving of every chance & opportunity in the world," wrote Hillary, and her followers took it to their hearts. This inspirational quote received more than 630,000 retweets.

"To all the little girls watching...never doubt that you are valuable and powerful & deserving of every chance & opportunity in the world."

Rio Olympics, PokemonGo and US elections were among the most tweeted-upon-topics of the year.