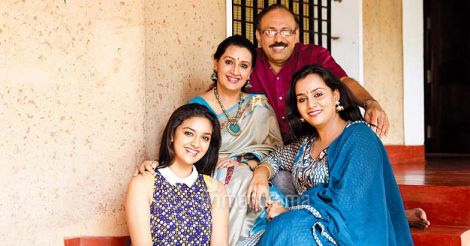 This is not a story that talks about the unique features of a celebrity house. We are at Revathy Kalamandir, a film academy built at the KINFRA Park in Kazhakuttom. So, you may ask, what makes it special? The architecture of course. We take a peek. The first and the most unique feature is that, it is entirely constructed of mud. The man behind Film Academy is producer Suresh Kumar. And the architect of this building is Eugene Pandala; who is famous for his works based on sustainability. The academy has been functioning for a year now, but it has a history which dates further back in time. 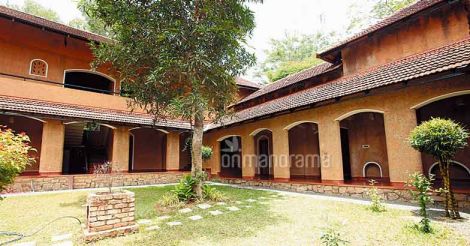 It was around twelve years ago that Suresh Kumar envisioned a film studio built in mud. On his insistence, Eugene took up the task at hand. However, after completing two storeys, the work came to a standstill. After a gap of seven years, Suresh Kumar decided that a film school should be established in the place of the film studio. Despite being left to the mercy of the elements all these years, the structure was as solid as ever and intact with no sign of weathering.

Read: Surfing through an ageless addiction 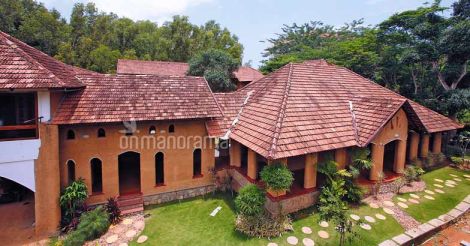 By 2011, the extra work for the film school was completed and Revathy Kalamandir Film Academy was a reality. The construction of this building is 100 per cent Vaasthu compliant. Suresh Kumar and former Malayalam actor Menaka's elder daughter Revathy overlooks the functioning of this film school. 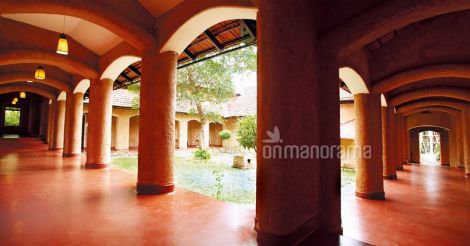 The school is set on a plot with an East-North orientation that is ideal as per Vaasthu calculations. The main 2-storey structure that spans 20,000 sq.ft, is built around a central nadumuttom like space. The 'rammed earth' style of building walls that mixes sand along with 5 per cent cement and the 'cob method' that combines sand, straw and clay have been predominantly used for construction.

The sand obtained from the plot has been used for building purposes. The use of concrete is minimal, ferro-cement has been used for the lining the arches. The roofing done is pretty simple by erecting roof tiles on a steel truss. 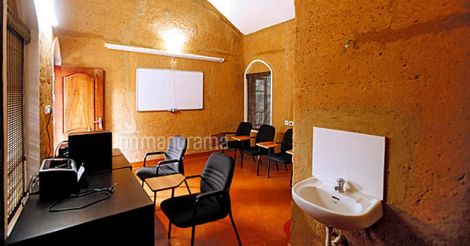 The studio that is part of the school has 2 different layers of roof and 2 walls. A double cavity wall built using the 'rammed earth' method ensures the sound proofing of this room. As the studio is not too far from the airport, there was a need for 2 roof layers to shut out the sounds of airplanes. According to the Architect, Eugene Pandala, mud as a building material, have certain acoustic quality to it. 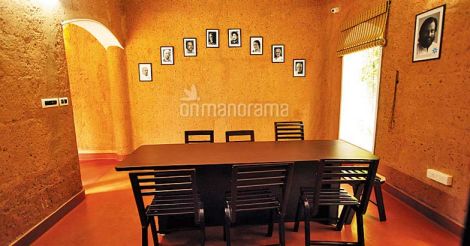 Read: When Vayalar Sharath Chandra Varma decided to move on 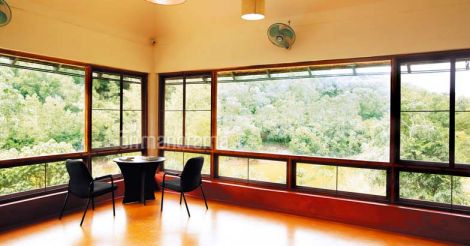 The rainwater harvesting system of the KINFRA Park is quite near to the studio. The shape of the plot helps in channelling the water got from this into a small pond in the campus. This water body adds to the charm of the building. 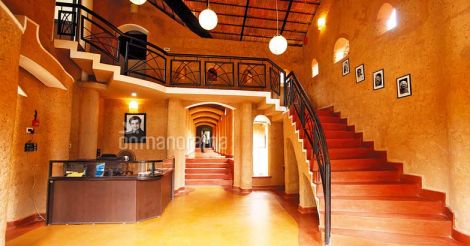 From the main reception area, there is a staircase that leads to a library. This comes directly above the porch and hence this room is not built of mud. Glass covered library walls lets us enjoy the scenic view from here, with the pond and the greenery around.

The oxide flooring throughout follow ochre, yellow and saffron tones. The design of the building ensures that there is ample flow of air and plenty of light. There is a 'Revathy Kalamandir Film Academy' sign fashioned out of terracotta right in front of the school building. 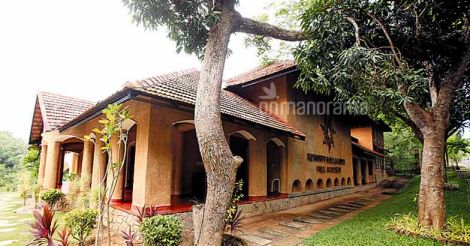 A reception, library, classrooms, staff rooms, a small cafeteria, shooting studio, sound studio, edit lab are the major rooms that make up the academy. Black and White photographs of stalwarts of cinema like famous directors, musicians, actors and producers adorn the walls.

To provide everything for cinema under one umbrella. Suresh Kumar is happy that he was instrumental in bringing that dream to realization. His is a family that is largely film-oriented. Though into acting like her mother Menaka, their younger daughter Keerthi studied Visual Communication. While Revathy, the older daughter who is also a dancer prefers to be behind the camera. The family together tries to give back to cinema, the good fortune that cinema brought to them in the first place.

(In arrangement with Veedu magazine)