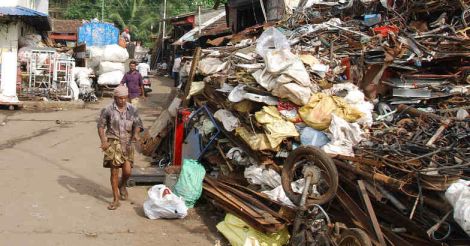 Even though scrap dealers are often believed to be dealing in commodities of low value, it is a business that rakes in a lot of money for its owners. There are even people who import scrap from overseas and then sell the melted metal out of scrap in the local markets to make a quick buck. The grapevine goes that when the World Trade Centre collapsed, someone made a fortune out of the scrap from the site. Established scrap dealers lead a lifestyle that matches the rich and powerful in India.

In a way, scrap dealers provide service to the society by converting waste into cash. Perhaps one could also consider the business as 'green' initiative that rids the environment of toxic materials.

According to the association of scrap dealers in Kerala, there are about 6000 scrap dealers in the state. All one needs to start this 'business' is a small shop and dedicated workers to collect scrap from near and far. The scrap is then weighed and purchased from the scrap collectors at established rates. Then the metal that is melted out of the scrap is sold at a higher price. Initially, at least, the business would entail purchasing rusted iron chairs for Rs 30 and then reselling it for Rs 75. Scrap iron would be procured for Rs 12-13 per kg and resold for Rs 14-15. What starts as a small business would slowly evolve with the owner planning his or her own steel rolling mill years later.

It seems the golden age of the business was between 2001 and 2009 because then the demand and cost for re-rolled Iron was about Rs 60 per kg. Even though costs of other commodities have increased over the years, the price of re-rolled iron has dropped to Rs 30 per kg. As the price of iron from companies are only marginally higher, people are purchasing directly from companies than opt for re-rolled iron. This is also a business that sees people part ways as soon as they form a partnership. Many people start a business together in which one is active while others are silent partners. After some time, the partners part ways and start their own units.

Scrap business owners experience windfalls in their business occasionally. For example, they sometimes get a chance to purchase government-owned goods in auctions. In such cases, they stand to make significant profits because in addition to iron, they might also be able to collect costly metals such as copper and brass.

Tailpiece: Stories abound about scrap dealers making fortunes because of sheer luck. The story of a youngster who boarded a scrap lorry by mistake, reached Tamil Nadu where he learned the trade and later returned to become a millionaire is, however, a real-life incident.