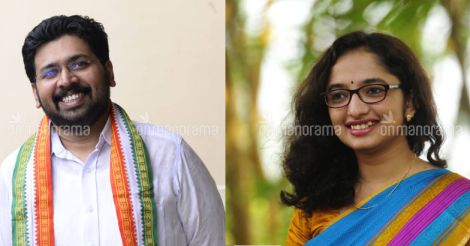 The wedding bells of Divya Iyer, IAS and Sabarinadhan, MLA have reverberated beyond Thiruvananthapuram and Kerala and the discussions have gone beyond qualities and personalities of the couple. Issues raised range from constitutional to practical as an alliance between politicians and bureaucrats has been rare. Known instances of such marriages can be counted on one’s fingers. The event is historic, but obviously it was made in heaven.

As for precedents, only one case of an IAS officer marrying a politician in Andhra has been reported, but the Indian Foreign Service has at least three cases. Ambassador Uday Chand Soni married Ambika Soni in 1961. The latter entered politics in 1969 and rose to become a member of parliament and a cabinet minister. Vijaya Singh, presently Ambassador to Ireland, married Vishvjit Singh in 1989. Singh had been elected to the Rajya Sabha in 1982. Former minister Kapil Sibal was married to late ambassador Nina Sibal, though Sibal was not a politician when he married her. None of these alliances had attracted much attention and no particular problem was reported on account of their respective professions.

Read: Birds of a feather? A president, a prime minister and a chief minister

Trappings of power may go, but beacons of inequality won't

Sabari-Divya love story: this is how cupid struck

Kerala’s penchant for dramatizing and sensationalizing events may be the reason for the extraordinary interest in Divya-Sabari alliance. Moreover, the extreme views of a politician on a sub-collector were still in the headlines when the news of the wedding came. The first advice that the couple received was that the particular minister should not be invited to their wedding.

The reason for the media hype goes beyond the unusual nature of the alliance. Both Divya and Sabari are newsmakers in their own right and they have been constantly in the news in recent months. Sabari had returned from his anonymous corporate existence straight into a tough election for the Congress party, occasioned by the demise of his father, G. Karthikeyan, the much respected and much loved speaker of the Assembly.

The Congress party had requested Sabari’s mother, an educationist, to contest, but she preferred to put up her son. The Oommen Chandy government got a much needed boost when Sabari defeated the veteran Communist leader Vijaykumar. His victory was seen as a vindication of Chandy’s claim that he was innocent of the many scandals that had plagued his government.

Sabari came out during the campaign and his present stint as MLA after his re-election is as a fine young man, reserved and mild, but fierce in his commitment to his constituency. His alma mater, the Loyola School, chose him as the outstanding alumnus of the school this year. His Engineering and MBA degrees set him apart from the rest of the politicians. He was also the most eligible bachelor in the Assembly at the age of 34.

Divya, of course, has been a star right from her childhood, securing high marks in every examination she took and taking first steps in music, dance and even dreaming of the IAS. Her medical degree from Vellore and admission in Tata Research Institute were milestones on her journey to the Civil Services. I saw her just before she appeared for the Civil Services first and I shared the expectation of her teachers that she would get the first rank in the first chance. Her disappointment on that occasion made her all the more determined about her goal and she joined Customs in the second chance and reached her goal of IAS and Kerala cadre in 2014. By then, my wife and I had accepted her as our “spiritual daughter”.

In the IAS, she has already made a mark by her dedication, commitment and versatility. She has written extensively and edited several books, including a collection of my political essays, grouped into chapters whose themes reflected the attributes of mythological characters. The book, ‘Applied Diplomacy through the Prism of Mythology’ created history by presenting diplomacy in a new light. The NSS Academy also published her pioneering work of annotating the syllabus of the Mains examination, ‘Pathfinder’, which became a bestseller nationally.

Within a short period, she has shown her administrative and legal skills and developed many innovative schemes. Her empathy and sense of service for the poor and the sick, developed at Vellore, benefited many poor people. Her oratorical and musical skills have already made her a hot favorite for any occasion. She has already acted in a short movie, together with Madhu and KPAC Lalitha, yet to be released.

History was made in heaven when Divya and Sabari met and liked each other. Some of us encouraged them not because it was a political alliance, but the union of two young people, who were too busy and too constrained by a conservative society to run around trees or to steal some private moments for themselves. Their decision to get married was a human decision, not a political scheme to create a power couple. They may have power on account of their individual positions, but they are too conscientious to work as a coalition for their own benefit. Their alliance is a matter of the heart, not of convenience.

A view has been expressed by some people that there is an unwritten understanding that bureaucrats should keep away from marital alliances with politicians. If such a convention exists, it is in contravention of the right of individuals to take personal decisions. The price they pay will be the constant vigil by the society and authorities to ensure that they keep politics out of their family life. The executive and legislature will remain separate even when they live together as a couple. There will be challenges, but with the good wishes that the couple has received from every section of the society will enable them to live together, but work separately in their own spheres for the good of the society.

Divya’s parents, Sesha and Bhagavathi Iyer, are fortunate to have her together with another talented daughter, Nitya. The arrival of Sabari in their home will be a double blessing for them.