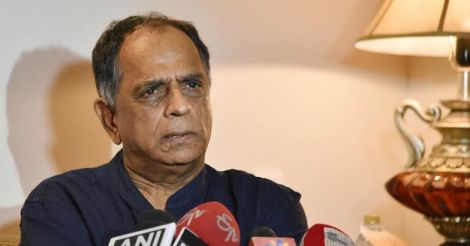 The Narendra Modi government's decision to remove Pahlaj Nihalani as the chief of the Central Board of Film Certification (CBFC) should be cheered by anyone with a sense of freedom of expression. The decision to end Nihalani's term short of at least six months is good news for not only filmmakers across the country but also for the BJP-led government at the Center in a wider perspective.

Under Nihalani's eyes, the CBFC had become a guardian of the Victorian morality, to say the least. Nihalani's unkind trimmer targeted anything it found 'unsanskari' or unsuitable and provocative for Indian culture. That Nihalani was annoyed with the length of a James Bond kiss (Spectre 2015) and the use of words such as cow and Hindu (Argumentative Indian, 2017) summarizes what the CBFC meant under him.

Nihalani knew no number when it came to cuts; he suggested 89 for Udta Punjab while 49 for Nawazuddin Siddiqui-starrer Babumoshai Bandookbaaz. While the former ended up in a court room drama involving the censor board and director-producer Anurag Kashyap, the makers of the latter film reportedly decided not to challenge the CBFC decision as Nihalani threatened them with more cuts.

Nihalani's cuts often reflected his regressive mentality which is deep-rooted in a strict sense of morality and fear of religious fundamentalism. He wanted the chanting of 'Hanuman chalisa' muted in Phillauri (2017) because the ghost in the film was not afraid of it. He did not want Lipstick Under My Burkha (2017) screened as it was because it was 'lady oriented.' Believe it or not, we are talking about a man who headed an institution like the censor board in the 21st century India!

Ironically, the Nihalani rule coincided with heated debate over the very concept of censoring. The BJP-led central government was often at the receiving end with Nihalani's regressive stances because they reflected the rigid and narrow-minded views of the Hindutva. Each cut by Nihalani gave the liberals and the intelligentsia another chance to accuse the government of undermining public institutions by appointing undeserving henchmen to plum posts. The Modi government must be hoping to escape further possible embarrassment Nihalani was likely to bring, had he been allowed to complete his term.

Now, India will have a new and relatively young censor board under writer-lyricist Prasoon Joshi; let's hope sense prevails with the new set of scissors.

Read more: Opinion |  Is Dileep the victim of a conspiracy? A lawyer's take

I will have a son: What Chiranjeevi Sarja told brother on having a baby

Dhruva Sarja, while talking to media shared about having an interesting conversation with late brother. I