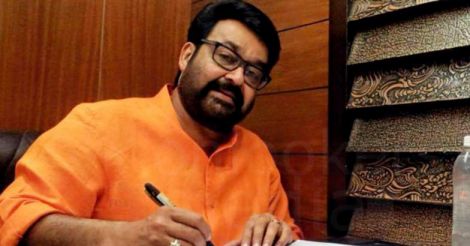 Mohanlal is undoubtedly a great actor and a popular star. And with that comes immense responsibility.

For this reason, when he offers a take on demonetization, it generates immense public interest.

Mohanlal is entitled to his own views on any issue. But his blog post on demonetization and eulogies to prime minister Narendra Modi, despite camouflaging it by saying he doesn’t believe in hero worship but instead lauds ideas, is suspect by intention.

The suspicion first arises from the plain fact that not many people who stand in queues, which the superstar describes as a temporary hazard for the greater goal, have seen him standing in a queue.

Standing in a queue is in no way a mean act. But when you are forced to stand in a queue to take out your own money and then there are curbs on the amount withdrawn, it is only natural that you feel humiliated.

Because you are not withdrawing black money or, in other words, unaccounted money. You are there to withdraw your own hard-earned money.

There is no need to invoke nationalism subtly here, as Mohanlal, and many of the vociferous supporters of this demonetization drive, are doing.

Invoking nationalism to justify draconian curbs is a fascist tendency.

As a nation, we do not subscribe to that ethos.

And when making sweeping comments, a person like Mohanlal should know that the magnitude of the issue of black money – liquid cash does not constitute the major chunk of black money. Rather, that chunk is in the form of benami properties, gold etc. And in tax havens where the government of India does not have any jurisdiction.

Why is it that proclaimed defaulters are living a life of luxury in London and the Indian government is unable to point even an accusing finger at them? Is it because they belong to the ilk of celebs, a la Mohanlal?

If Mohanlal had indeed posted a blog against any one of these characters when they fled the rule of law to live in the lap of luxury, there would have been no room to suspect his intentions here. Unfortunately that is not the case.

Mohanlal’s blog post came from the sets of a movie, the director of which is a votary of the ruling party of India. The suspicion gets more robust here.

You need not be a war veteran to be a patriot. And you need not preach what you do not practice either.

Mohanlal, the popular icon, is revered, but not the preacher working at the behest of someone else.

Now, if Mohanlal indeed nurses political ambitions, and if that is what drove him to write the above-mentioned post, that is okay – only he needs to come clean on that.

Otherwise, these posts are suspect. Period.

(The views are personal)