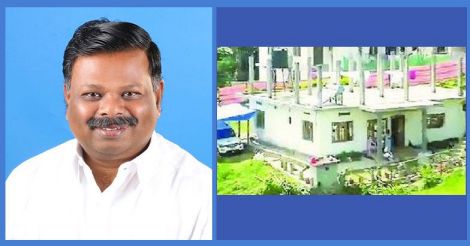 Thodupuzha: Devikulam MLA S Rajendran found himself in the eye of a storm after the opposition UDF in Kerala alleged that the CPM leader had forged documents to squat on government land in Munnar town.

Rajendran, however, said he possessed the title deed on eight cents of land where he had built a house. Chief minister Pinarayi VIjayan also repeated the claim, seeking to put the blame for the controversy on local reporters.

Rajendran’s house is situated at Ikka Nagar, a township where about 10 acres of land is alleged to have been encroached by CPM leaders and cadre. This land belongs to the Kerala State Electricity Board and the Public Works Department.

The plot where Rajendran’s house is situated belongs to the Public Works Department, according to survey number 62-9 in the Kanan Devan Hills Plantation village. The government has not entrusted any land to tenants in this area, sources said.

Opposition leaders insisted that the title deed Rajendran claimed to possess was a fake. S Asokan, the district chairman of the United Democratic Front in Idukki, said a court had earlier rejected Rajendran’s claim to the land.

Rajendran had sought an injunction from a munsiff court at Devikulam against the electricity board’s claim to the land. The court, however, found merit with the board’s arguments and rejected Rajendran’s plea, said Asokan, who represented the board as its standing counsel in the district.

If Rajendran were to obtain a title deed for the land in question, it could not have happened without the consent of the board, Asokan said.

The legislator said that the title deed was granted by the land assignment committee headed by A.K Mani. He said there was a misinformation campaign going on against him.

Even the CM said the campaign was not new. “Rajendran told me that there was a campaign that even former MLA N Ganapathi’s ancestral house was built on encroached land,” Pinarayi said.