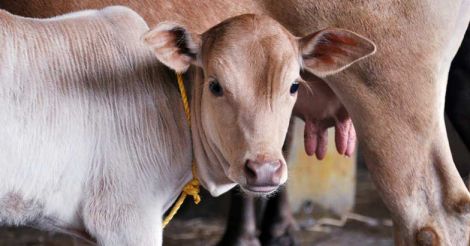 Thiruvananthapuram: An inquiry conducted by DIG, Prisons, Sivadas Thaiparambil, has rejected reports of a controversial cow worship rite held at the Open Jail at Cheemeni in Kasaragod district.

There were reports that certain religious leaders had reached the prison on the premise of blessing the cows donated from Karnataka and a religious ceremony was conducted on the premises.

It was also reported that the religious leaders accompanied by jail officials and prison inmates zealously worshiped a dwarf cow on the jail precincts.

The ceremony ended with the participants acclaiming the 'go mata ki jai' in Hindi. ADGP, Prisons, R.Sreerekha, had ordered an inquiry into the incident.

Sivadas, in his report submitted to Sreerekha, said that no such incident had occurred in the jail precincts.

But jail superintendent, A.G.Suresh, who was served with a memo in connection with the incident, went on sick leave for a week.

The report says that there was nothing wrong in accepting the cows that were donated to the prison and it was the organizers who shouted the slogans in Hindi.

The jail officials and inmates did not chant 'Go Mata ki jai', the report says.

Though the Special Branch had reported that a controversial seer who was jailed at the Central Jail Poojapura, was also present at the ceremony,the DIG did not probe that aspect.

Sreerekha, in her e-mail charge memo, had accused Suresh of committing a grievous lapse. Acceptance of eight cows from a club at Cheruvathoor and two from an ashram in Karnataka without prior permission is a serious violation of rules.

The rites conducted for taking them to the cowshed was also a grave lapse. Conducting rites of a particular religion in a place where people of different religions live together was not fair.

The memo had warned of stringent action on failing to provide a satisfactory reply in 10 days.

The superintendent had gone on sick leave. Earlier, when the ADGP sought a clarification over the phone, he explained that accepting donation was not a violation of rules. The DIG has also approved it. With the incident triggering a row, the Prisons ADGP has issued a circular against accepting donations from outside.

Meanwhile, Jail IG, H.Gopkumar, is rearing cows at his quarters at Poojapura using jail inmates. After inspecting the quarters, Sreerekha had issued a memo to the IG earlier.