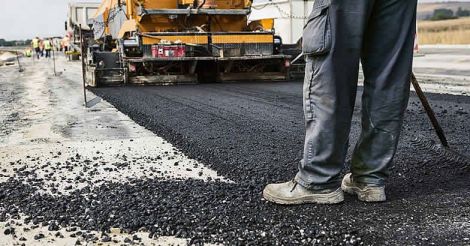 Thiruvananthapuram: Following the footsteps of metro cities in the country, Kerala has started using reused plastic productively in the construction of roads.

So far, 15 tons of plastic granules have been used along with bitumen for re-laying roads across the state. It is learnt that the Public Works Department has approached the State-run Clean Kerala Company Ltd (CKC), the agency tasked with hygiene management, to provide 15 tons of plastic waste in a month’s time.

According to PWD officials, the department is facing a severe shortage of shredded plastic waste after Local Self-Government (LSG) bodies started using polyblend for asphalting roads. The government had directed all the local bodies in the State to use plastic for at least 10 per cent of the roads laid within their territorial jurisdiction.

Heeding the instructions, nineteen LSGs that include seventeen grama panchayats, Kalamassery municipality and the Palakkad block panchayat, laid out roads in which granule made of recycled carry bags and other plastic refuse was a key component.

Recently, the PWD asphalted several stretches with plastic waste mix in the districts of Thiruvananthapuram and Pathanamthitta.

Apart from increasing the durability of roads, the use of plastic materials in asphalting roads is also seen as a scientific way to tackle plastic waste.

Plastic carry bags thinner than 50 microns, that cannot be recycled, are heated and processed along with the bitumen used for constructing roads. About 1,700 kilograms of waste plastic is required for asphalting a one-kilometer stretch.

Carry bags and other plastic refuse dumped in garbage bins are bringing in additional revenue to many local bodies in the state. They collect the waste and convert them into granules with the help of shredding units before selling them to the Clean Kerala Company.

At present, CKS purchases granulated plastic from Attingal, Payyannur, Koyilandy, Perinthalmanna, municipalities, Kochi Corporation, and the panchayats of Vanimel, Kalloorkkad and Kuttiadi for Rs 15 per kg.

The agency supplies it to the contractors at a rate of Rs 20 per kg. The estimated cost for setting up a shredding unit is around Rs 5 lakh.

The PWD has decided to increase the fund by 15 per cent for road projects using plastic granules as a construction material. The department has also organized a training program for its engineers in association with the Highway Research Institute on laying roads with granulated plastic.

According to experts, eight per cent is the optimum plastic content for blending the bitumen in the construction of plastic roads. It is used to lay the bottom layer followed by the mix of bituminous macadam and bitumen concrete on the top.