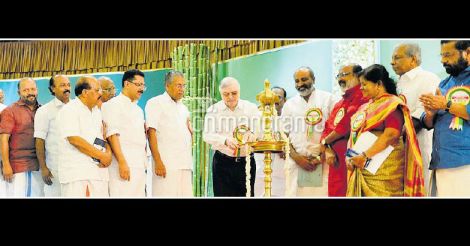 Thiruvananthapuram: CPI-M-led LDF government in Kerala on Thursday unveiled four projects under 'Navakerala Mission' for comprehensive development in the fields of health, education, housing and sanitation.

The schemes are- 'Haritha Keralam' that envisages a clean state by taking up various waste management programmes, 'Ardram', a scheme for improving facilities in government run hospitals with a view to extend treatment at a reasonable price, 'Life', a mission for providing house to homeless people besides 'a mission to preserve public education system' by taking up a comprehensive change in teaching methodology, Pinarayi said.

Government plans to implement schemes under the project on time bound basis with the support of civic bodies, he said.

Taking up sanitation schemes, preserving water sources and agriculture development would be the main focus of Haritha Keralam, he said adding organic farming would be promoted.

Kerala, which has put in place a somewhat effective system of decentralization in governance, can bring about an impact through the cooperation of Local Self Government bodies and institutions, he said.

The Navakerala Mission, which is being launched today, is a step in that direction, he said. 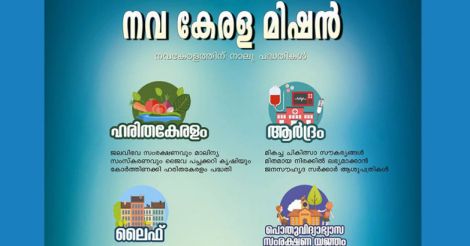 "The Ardram health mission's aim of ensuring quality health care with minimal waiting time for outpatients is a hope for millions who use our public health care system," he pointed out.

The Comprehensive Educational Rejuvenation Programme, to be launched as part of Navakerala, can be seen as a new bench mark in educational infrastructure, he said.

"Our decision to transform 1000 schools to international standards and to improve the teaching and learning programme at the high school level are expected to strengthen and modernize our primary education sector," he said.

"However, I would suggest that we think of a similar mission for higher education also," he said.