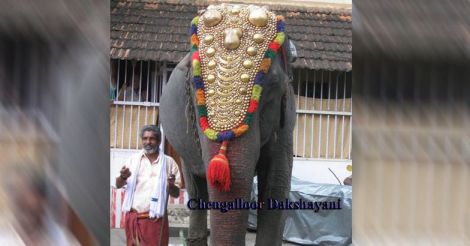 Dakshayani of the Chengalloor Temple in Poojappura. Photo: Travancore Devaswom Board

Thiruvananthapuram: At 86, Dakshayani shows few signs of aging and looks absolutely fit and graceful as she gets all set to enter the Guinness World Records as the oldest-living elephant.

The Travancore Devasom Board (TDB) - the owner of the elephant - has already written to the Guinness authorities staking claim to Dakshayani being the oldest-living elephant in the world. The elephant is with the Chengalloor Temple in Poojappura.

The TDB owns 1,250 temples in south Kerala districts, including the famed Sabarimala temple. They have 33 elephants which take part in the festivals of their temples.

Addressing reporters here on Monday TDB president Prayar Gopalakrishnan said that records available with them, including of the Kerala Forest Department, show that Dakshayani is the oldest.

"As a first step to enter the Guinness, we are honoring her on Wednesday, and we will be working towards this. On the day, a special postal cover of Dakshayani from the Kerala Circle Postal Service would be issued," added the TDB president.

As per the TDB, the oldest-living elephant, which was 85 years old, died in 2003 in Taiwan.

"Dakshayani and another elephant, are the only ones of the 10 that have been there with the TDB since its inception in 1949, which are alive now. She was gifted to the TDB by the erstwhile Travancore Royal family," said the TDB president.

He also said on the same day three mahouts who tended to Dakshayani and are now retired would be honored, along with the two mahouts who take care of her presently.

"On the same day we will bring out a directory of the 33 elephants that are owned by us and would include the entire history of each elephant," said Gopalakrishnan, and added that nowadays there are scientific ways to determine the age of an elephant.

The government, headed by CM Pinarayi Vijayan, was forced to introduce the withdrawal government as it...