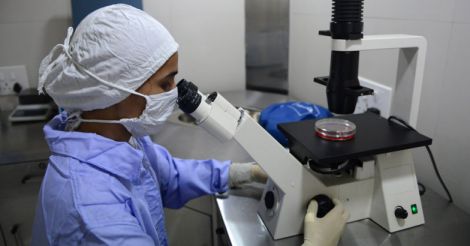 Mumbai: A four-year-old paralytic Nigerian girl got a new lease of life in India after undergoing stem cell therapy, her mother said.

"We went places but could not get any help but it was in India that we found our saviour," Oyalami, the mother, told IANS over phone, referring to the doctor at private hospital StemRx Bio Science Solutions here who treated her daughter.

She said her daughter Zahara could not even move an inch due to the paralysis, but has started to move after receiving stem cell therapy for months.

One of the twin sisters, Zahara was prematurely born to her parents. She suffered from hypoxic brain injury (oxygen deprivation to the brain) which caused cerebral palsy or paralysis of the nervous system.

The girl was eight days old when her parents noticed she was unable to move her body parts. The infant also had seizures, sudden surge of electrical activity in the brain.

Upon reaching the age at which children walk, Zahara had "scissor gait" with knees and thighs hitting each other as she tried to walk.

The doctors suggested certain physiotherapy exercises and oral medications after which mild improvement was noticed. But as days passed Zahara's parents noticed their daughter could not communicate or express herself clearly.

In quest of better treatment, her parents took Zahara to London and Dubai, but things did not work out.

Having learnt about the promise of stem cell therapy, her parents then brought her here, where they met Pradeep Mahajan, a transplant surgeon and stem cells expert who runs private hospital called StemRx Bio Science Solutions.

Mahajan directly thought of going for stem cell therapy to treat the girl as the procedure had shown improvement in several other paralytic patients.

Stem cell therapy is the use of stem cells to treat or prevent a disease or condition. Stem cells are undifferentiated cells of an organism which are capable of giving rise to indefinitely more cells of the same type and from which certain other kinds of cells arise by differentiation.

After undergoing the treatment for several months, Zahara started showing positive results and began to move her body.

"Stem cell therapy has indeed worked in Zahras' case. I have treated patients with this illness and I hope to bring life to Zahra completely as well, so that she can be as cheerful as her twin sister," said Mahajan.

Oyalami, the girl's mother said: "I am glad I came to India, Dr. Mahajan has been a saviour for my daughter."

Zahara has to undergo a few more sessions of stem cell therapy as well as physiotherapy, neuromuscular stimulation and oxygen therapy, for better results.