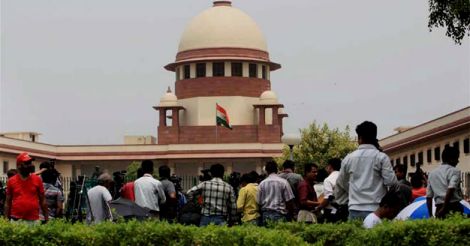 New Delhi: Supreme Court on Friday agreed to dwell on the issue of evolving acceptable solutions and schemes for protection of rights of the elderly and to establish old age homes in every district of the country.

The apex court also sought the assistance of the NGO HelpAge India and National Legal Services Authority (NALSA), which provides free legal services to weak and vulnerable sections of society, and sought response of the government on a petition filed by senior Congress leader and former Law Minister Ashwani Kumar, which also sought a hike in budget allocation for the purpose.

While issuing notice to the Ministry of Social, Justice and Empowerment, a bench headed by Chief Justice T S Thakur noted that HelpAge India has been playing critical role and "the NGO is required to assist us in evolving an acceptable solution and schemes."

The bench issued notice to the Member Secretary, NALSA asking it respond whether it had any scheme for protection of rights of senior citizens and if so, to place a copy of it before the apex court.

It also asked NALSA to spell out feasible steps that can be undertaken for protection of the rights of aged citizens in implementation of the existing laws, schemes and policies.

The bench told Kumar, a senior advocate and a Rajya Sabha MP from Punjab who has filed the PIL himself, that his concern was appreciable but all state governments cannot be accommodated in the matter at this stage and the scope of his PIL can be seen by issuing notice to the Centre.

The former Law Minister said there were a large number of aged people and their number has been increasing, with most of them living in poverty, without any roof over their heads and proper clothes and food, and the budgetary allocation for their welfare has been paltry.

He said there are several central laws and schemes for their welfare, but all these were either not implemented or had become defunct.

The petitioner said that despite various assurances by the government to improve the process of budgetary allotment, the same pattern prevailed during 2014-2015.

He referred to a report of the Standing Committee during the demand for grants 2015-16, saying the amount allocated at the budget estimate stage was Rs 50 crore in 2014-15 which was cut down to Rs 25 crore at revised estimate stage and only Rs 10.45 crore could be utilised.

The petitioner sought that adequate number of old age homes be established in the country and direction be given to maintain and operate such homes with adequate standards to enable the elderly live their life with dignity and in accordance with section 19 of the Maintenance and Welfare of Parents and Senior Citizens Act, 2007 (MWP Act).

It contended that there is a lack of basic amenities such as shelter for the elderly and the policies framed by the government have not addressed the basic issue.

It sought implementation of Integrated Programme for Older Persons scheme to protect and provide adequate safeguards to the aged in accordance with Section 21 of the Constitution.

Besides this, the Congress leader's PIL also sought establishment of full-time Tribunals in every state as mandated under the MWP Act, to look into applications for maintenance made by senior citizens.

"Publicise the provisions of MWP Act and effectively implement the National Programme for Health Care of the Elderly throughout India and create Geriatric Centers in all the 622 districts of India," it said.

"Despite being a Fundamental Right, the elderly in India are dependent upon their family members for basic need such as housing and healthcare. Pertinently, the policies framed by the Government till date, has not addressed this basic issue".

"Lack of easy availability of financial assistance coupled with harsh repayment schedules and high rate of interest, the elderly in India are practically 'disabled' from affording basic necessity such as housing and other basic needs to live a life with dignity, thereby, violating their Fundamental Right guaranteed under Article 21 of the Constitution," the petition said.

Kumar has established an Old People's Home at Gurdaspur in Punjab for which he sanctioned over Rs two crore out of his Members of Parliament Local Area Development (MPLAD) fund.

He also referred to the inadequate implementation of the National Policy on Older Persons due to which the Government had set up a Committee under the chairmanship of V Mohini Giri to draft a new National Policy on senior citizens, which submitted its report on March 30, 2011.

However, despite the passage of four years, the National Policy has not been finalised and no development in this area has taken place, he said.