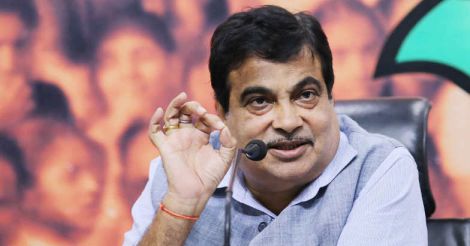 New Delhi: Calling upon automakers to develop home-grown technologies to build environment-friendly car engines under the Make in India drive, Union Minister Nitin Gadkari on Sunday said encouraging such endeavours will help them save on huge royalty costs.

"Even today despite more than 90 per cent indigenisation some of our car manufactures have been paying royalties for technology of over Rs 4,000 crore every year. They will not be required to do so if they develop indigenous technologies," Road Transport and Highways Minister Gadkari told PTI.

The automakers should encourage indigenous technologies under Make in India drive, the minister said while stressing that nation is battling with the problem of pollution and this could be their contribution to check it.

Citing example of Brazil, he said, "Flex fuel is available for all major brands, whether Volkswagen, Ford, Toyota, Honda or Hyundai. Flex engine is there. In the same tank you can use petrol and ethanol."

"Why can't the automobile manufacturers here get indigenous technologies?" he wondered, asserting that such an initiative would not only reduce pollution but would help in diversification of agriculture.

thousands of our farmers are committing suicide. We will definitely encourage diversification of agriculture towards energy, power and bio-plastics which in turn would strengthen the hands of poor farmers," he said.

He said ethanol could be manufactured from a wide variety of crop yields right from sugarcane to wheat and rice.

Promotion to biofuel could cut on huge crude import bills which is to the tune of Rs 8 lakh crore per annum, he said and added this would not only boost the economy but also curb pollution.

Prime Minister Narendra Modi addressing a public rally at Noida on December 31 had also appealed farmers of Uttar Pradesh to switch to ethanol production in case of surplus sugar production so that they not only earn profit but also contribute to minimise vehicular pollution.

Gadkari said if such biofuel friendly vehicles would be available, it would help farmers.

At the same time he said the government focus was also on electric vehicles and ISRO scientists have already developed indigenous lithium ion battery at a mere Rs 5 lakh in comparison to imported Rs 55 lakh to power buses.

"We plan to convert 1.5 lakh state transport corporation buses into electric buses... We have already gifted one such bus to Parliament. Many Indian companies have shown interest in developing the retrofit solutions under Make in India drive for diesel to electric conversion," he said.

He added one such bus will save the environment from 48,000 kg of CO2 on annual basis.